I have finally finished correcting the VanGogh essays my 5th graders did, and I have to say I'm impressed by a few.  Quite a few of them really did not want to write at all because it was art class and I hate to say it, but they won't be happy with their grade.  They're teachers also were not very happy because they've been working very hard on essay writing in class.  And, never mind the fact that state testing is starting next week!

Anyways, I wanted to share a few of the essays that I really enjoyed reading.  When students wrote these essays, I did have the September 2012 Scholastic Art magazine available for reference, as well as 5-6 VanGogh books from the library.  These students obviously used their resources as well as information they retained in their memory from the VanGogh presentation. 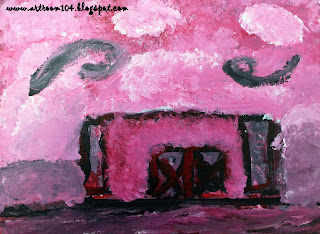 Do you know facts about VanGogh?  He was one of the most tragic artists who ever lived.  Van Gogh was born in Holland in 1853 and died in France in 1890.  VanGogh didn't want to be a painter until he was grown up.  He worked in a bookstore and he was a preacher like his dad.  He went to different art schools to learn how to draw.
Mine is a landscape and my landscape is compared to Starry Night.  Ours are the same because we both have swirls in our sky.  Also we both have a building.  Also VanGogh has bushes.  I'm now going to tell you how they're different because I don't have trees and he does.  He also has buildings and I don't because I only have 1 building.
I used lines and texture.  I used them in my barn and my sky and I used them with a short brush.  I went back and forth.  I have nothing that I want to change because I think it looks good.  Well I would like to change the sky but that's it.
I like his artworks because it has lots of elements.  Also because he has lots of sad colors.  I have seen Starry Night and that's my favorite. Starry Night is my favorite because it has my favorite colors on it.  Also I like Starry Night because it has bright colors on it.
I would ask him what painting out of all of them he likes best.  I would ask him that because he has so many paintings and I think that he has a favorite.  If I would get to see him I would tell him that some of his paintings are hanging up in McDonald's and I would tell him that I like his Starry Night.
I loved this essay because it was surprising from the particular student who wrote it!  I honestly hadn't expected it to be as detailed as it was.  I also really loved that the student made the connection at our local McDonalds!  There are faded reproductions of VanGogh's art hanging in the restaurant.  The student told me that they had been at McDonalds and realized those were VanGogh paintings.  When they started talking about it, they said the workers there were asking questions to see what the student knew!  I was impressed. 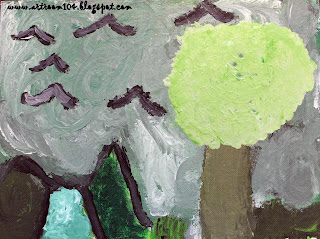 Do you know who Vincent VanGogh is? Vincent was named after his brother that diet.  He after when painting used a very small variety of colors.  No one wanted to buy any of his paintings.  His brother Theo sent him money because he was poor.  Theo was four years younger than Vincent was.  Vincent and his brother were really close.  Now do you know some things about Vincent VanGogh?
Have you ever drawn or painted something and compared it to a famous artist's painting?  I compared my painting "Alone" to Vincent Van Gogh's "Starry Night".  Our artworks are the same because well one the texture of our sky.  Then because we both used a tree in the foreground of our paintings.  They are not alike because his tree is different from mine and in his your like looking down on a village.  Also because his has houses and buildings and mine doesn't.  Can you somewhat understand how my painting and his painting are alike and unlike?
Do you know what the elements of art are and how to use them?  In "Alone," I used the line element in my sky.  My sky is swirly like Vincent's sky in "Starry Night."  Then I used texture in my tree.  I dotted the leaves on my tree.  If I could change anything about my painting, it would probably be the shape of my hills and where they are in my painting.  Can you name all the elements of art?
Do you like Vincent Van Gogh's art?  I like his art because each painting says something and has its own personality.  Each of his paintings are different and are special in their own little ways.  They are based on emotions and feelings.  I think they are one of a kind and unique in their own way. My favorite is Starry Night because I really love the colors, the style, the texture.  I just love everything about it!  What is your favorite painting by Vincent Van Gogh?
If you could ask or tell anything to Vincent Van Gogh what would it be?  I could ask him something it would be how or what inspired him when he paints.  Then if I could tell him anything it would be why I love his art and that I think he is a brilliant artist.  I hope you have enjoyed my essay and that you want to read it again.
This essay was the best one I had.  The student used awesome details and a lot of art vocabulary!  It was also one of the most well-supported essays that was written! 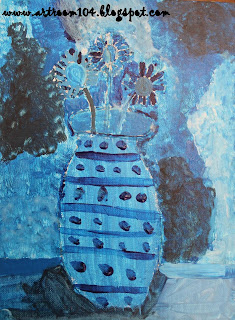 Do you know some facts about Vangogh?  First Vincent wanted to paint pictures of things he cared about.  Vincent painted a picture of poor people and called it The Potato Eaters.  Second Vincent made friends with artists named Paul Signac and Georges Seurat.
Do you know the difference and similarities between my painting Blue Vase and Van Gogh's painting Vase with Sunflowers?  First the difference is Van Gogh's painting is all yellow but my painting is blue.  They are similar because we each used one color throughout the painting.
Do you know the elements of art I used for the painting Blue Vase?  First I used line in the vase's designs.  Second I also used space in the painting when I put the vase and flowers closer than the wall behind them.
Do you know why I like Van Gogh's art?  First I like his art because he uses a lot of paint.  My favorite painting is Starry Night.
If I could ask Van Gogh one question I would ask him why do you like painting?  If I could tell Van Gogh something I would say I like your art. 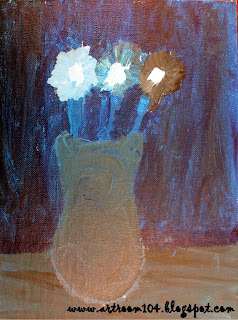 Vincent Van Gogh was an artist who painted hundreds of paintings in his whole lifetime, though he only sold one.  He cut off his ear and sent it to his ex-girlfriend.  Ya, Vincent was seriously messed up.  He shot himself in a field during his blue time.
My artwork is compared to Vincent's painting Flowers.  They are the same because they are both flowers in a vase.  They are also both lights and darks from the same color and we both have it on a table with a wall in the background.  Our artwork is different because they are different colors.  Also that they both have different flowers.  His flowers are some droopy and some straight and mine are all straight.
In my artwork I used line, form, colro and value.  I used value when I painted tints and shades of the same color.  I used color when I painted color onto the canvas.  I used line because I used lines that go in different directions.  I used form when I drew my flowers and the vase.
I love Vincent's artwork because he is a very good artist and I like how he uses swirly lines and tints and shades of one color.  My favorite would be Starry Night.
If I could ask VanGogh one question i would ask him if he could give me art lessons.  If I could tell VanGogh something I would tell him that his artwork is fantastic and that I love it.  But of course, I can't do any of this 'cause he's dead.
This one is pretty good but I think it's pretty funny because of the random comments written in as if the writer was talking out loud!