One of the NYS Listening & Learning strands for 1st grade is Astronomy, so I wanted to find a cool art project that I could do with my 1st graders.  I thought about doing a Starry Night-esque painting using constellations, but I thought that would be a little above my students, no matter how much I simplified it.  Despite the simple steps I broke this project down into, it literally took us almost four complete classes to do this...i.e. an entire month!  Needless to say, my 1st grade classes this year are rambunctious!

Anyways, I found the idea for this project floating around on Pinterest...the link took me to the blog Fun Art 4 Kids, where I pretty much used the process there word for word.  The original poster used this with 6th graders whereas I used it with 1st graders.  I think the project was still successful and probably would have been even more successful if they listened to directions a little better.

On the first day, we drew our mountains on manila tag board and then cut them out.  Unbelievably, this took an ENTIRE class period because students weren't listening.  I had to approve of their mountain line before I let them cut, and they had to cut them out in one piece (so they essentially ended up with two sets of mountains). Students started cutting before I was able to get to them to approve their design...and cut their mountains into four pieces, or did it vertically instead of horizontally, or made them really small...the list is endless.

On the third day, we did the lights in the sky.  We took the mountain patterns that we made and choose the biggest (tallest) mountain and laid it on the black paper.  Students had to take three different colors of chalk pastels and draw lines from the mountains up to the top of their paper. Then, we took a tissue and wiped the chalk in the same direction to blend the colors (without making too much of a mess on our hands).  I found that it was a little difficult for the younger students to hold the pattern in place while coloring, so I went around and put paper clips on theirs to help them hold it in place. 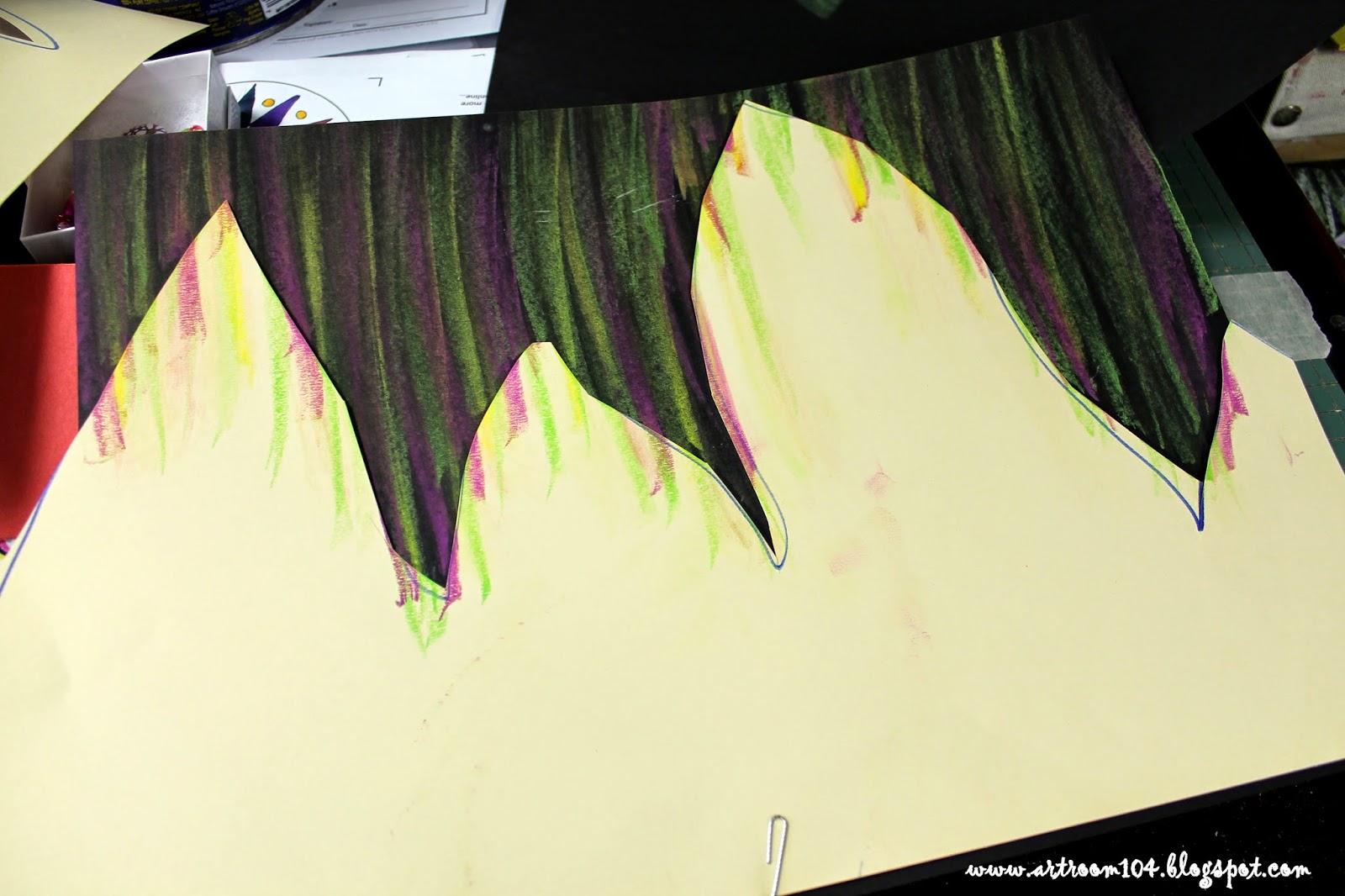 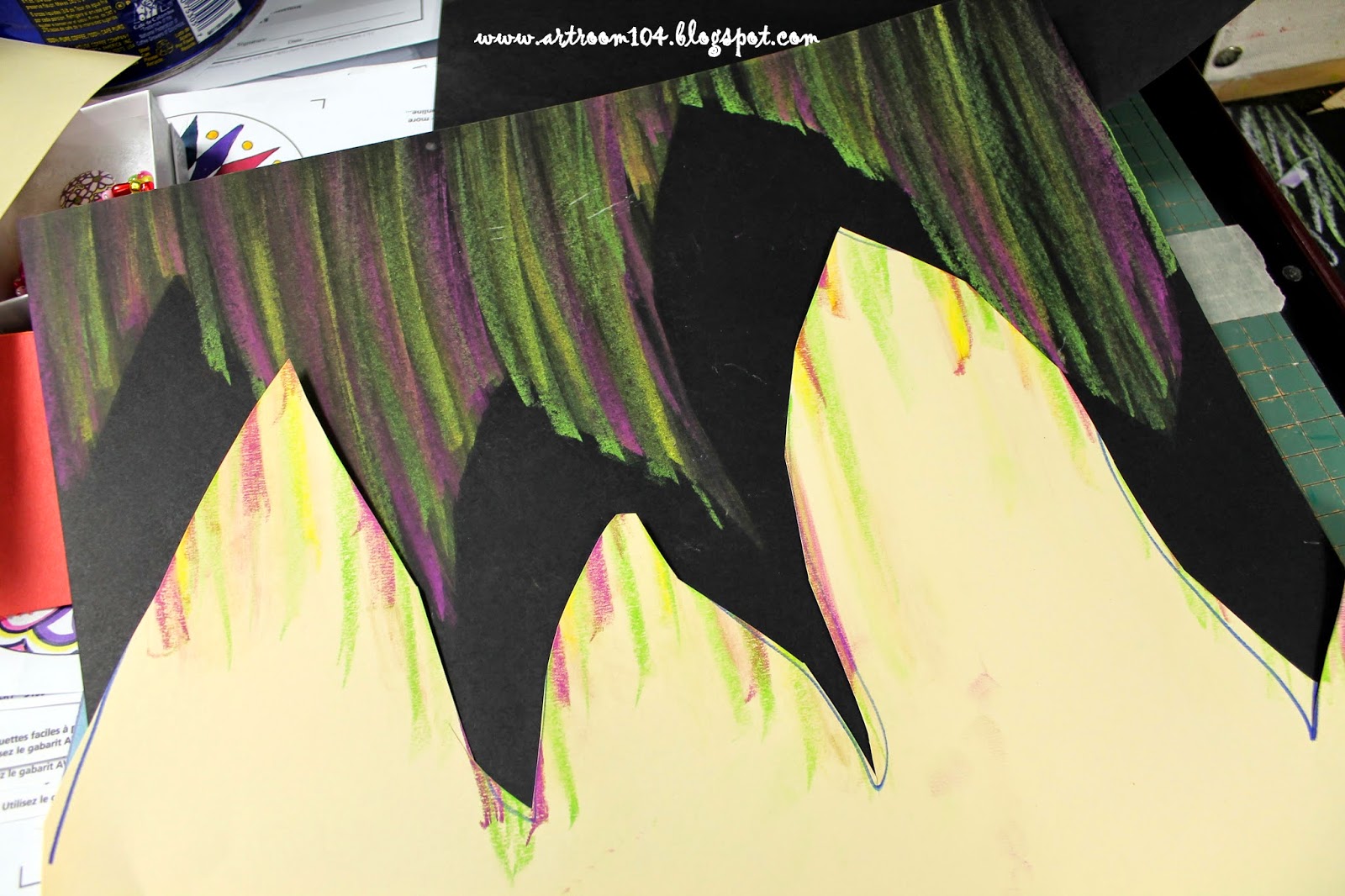 On the last day, we traced our mountain patterns on the watercolor paper that was painted on day 2.  Again, they had to cut the mountains out in one piece.  Students took the biggest mountain and glued it in place on their background.  I then asked students to trade their small mountain range with another student.  You WOULD NOT BELIEVE the number of students who were unhappy about this!!!  Usually, they are always giving each other their free draws and swapping, trying to help each other out and draw on each other's work.  When I asked them to switch, I had one boy who almost had a complete break down!

So, after all of that, here are our finished projects! 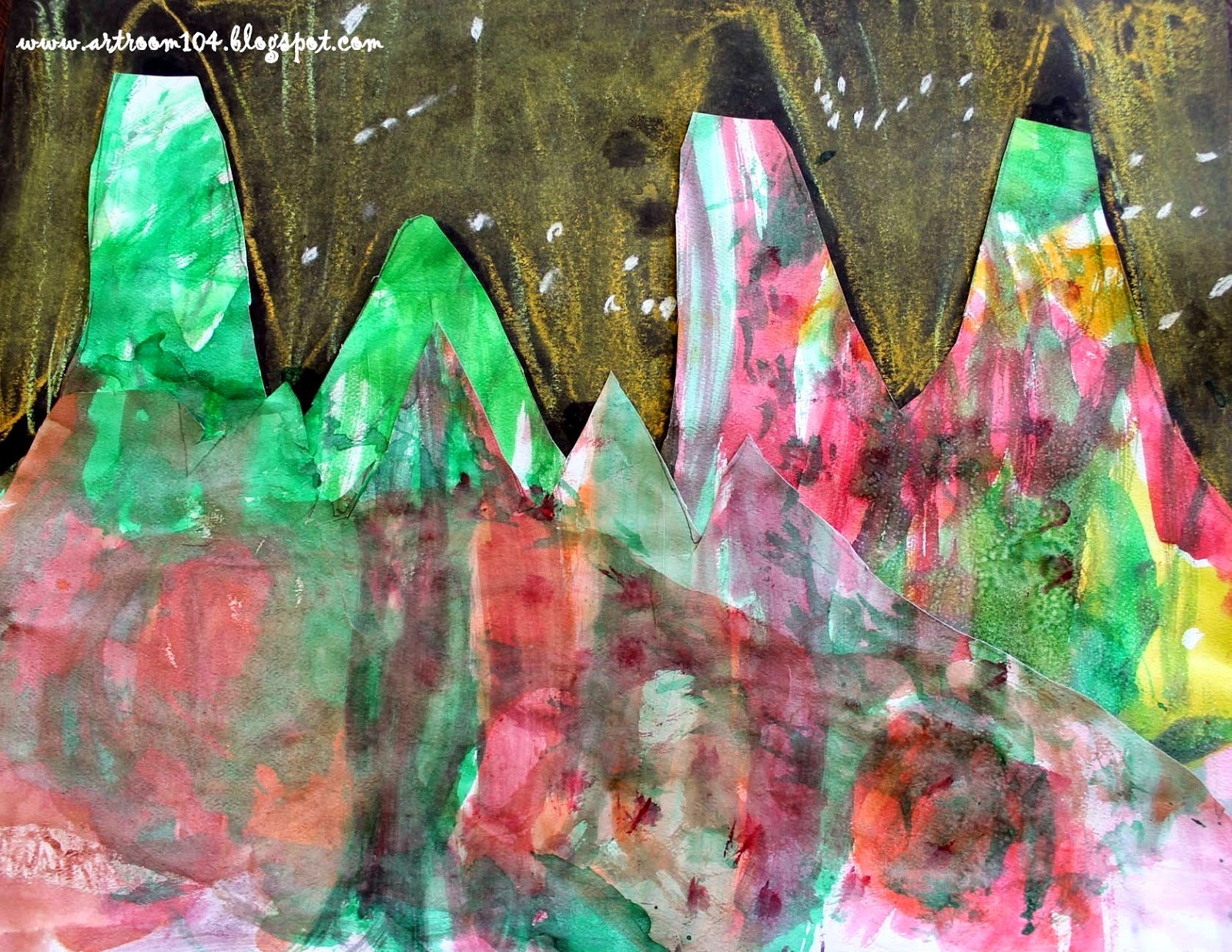 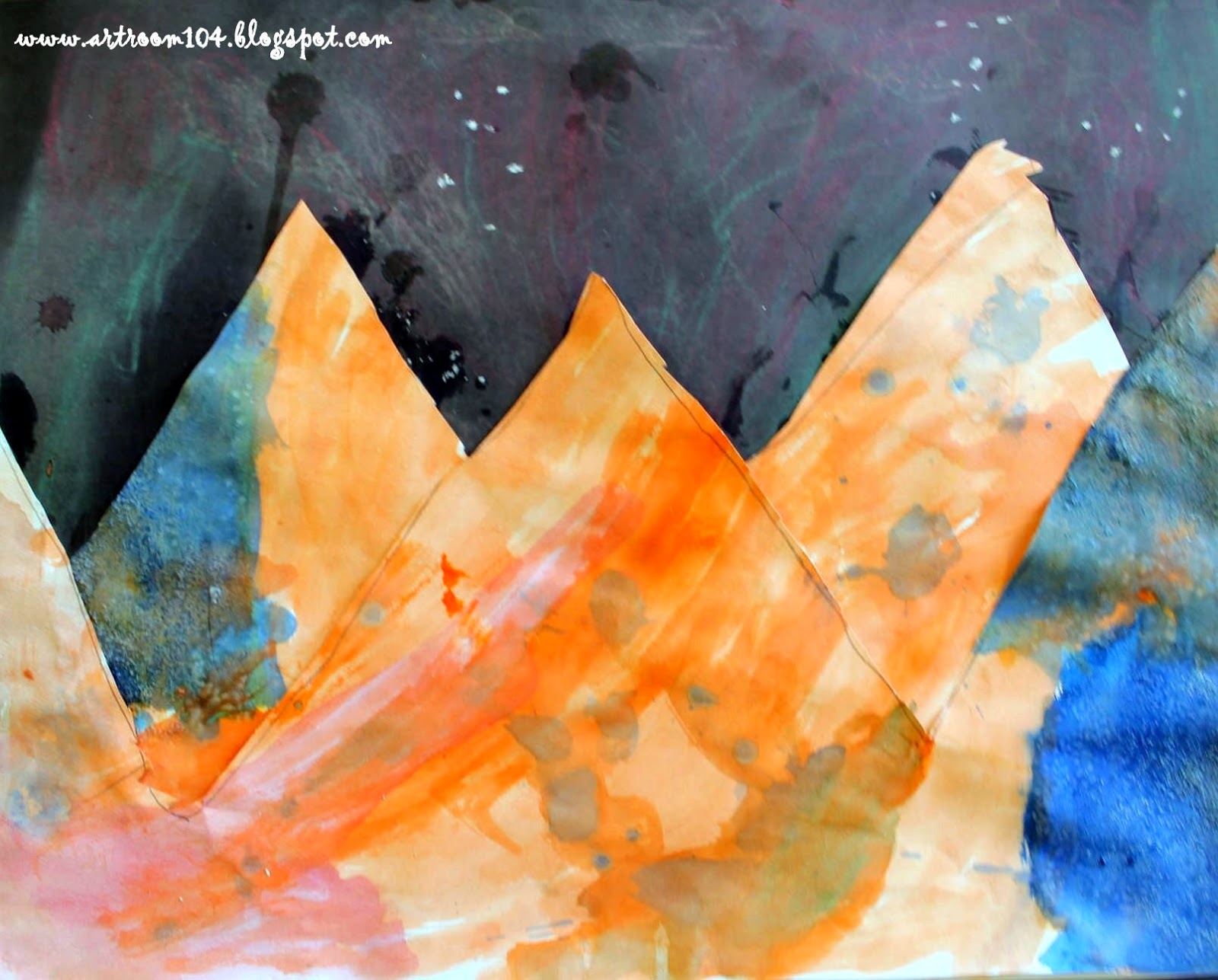 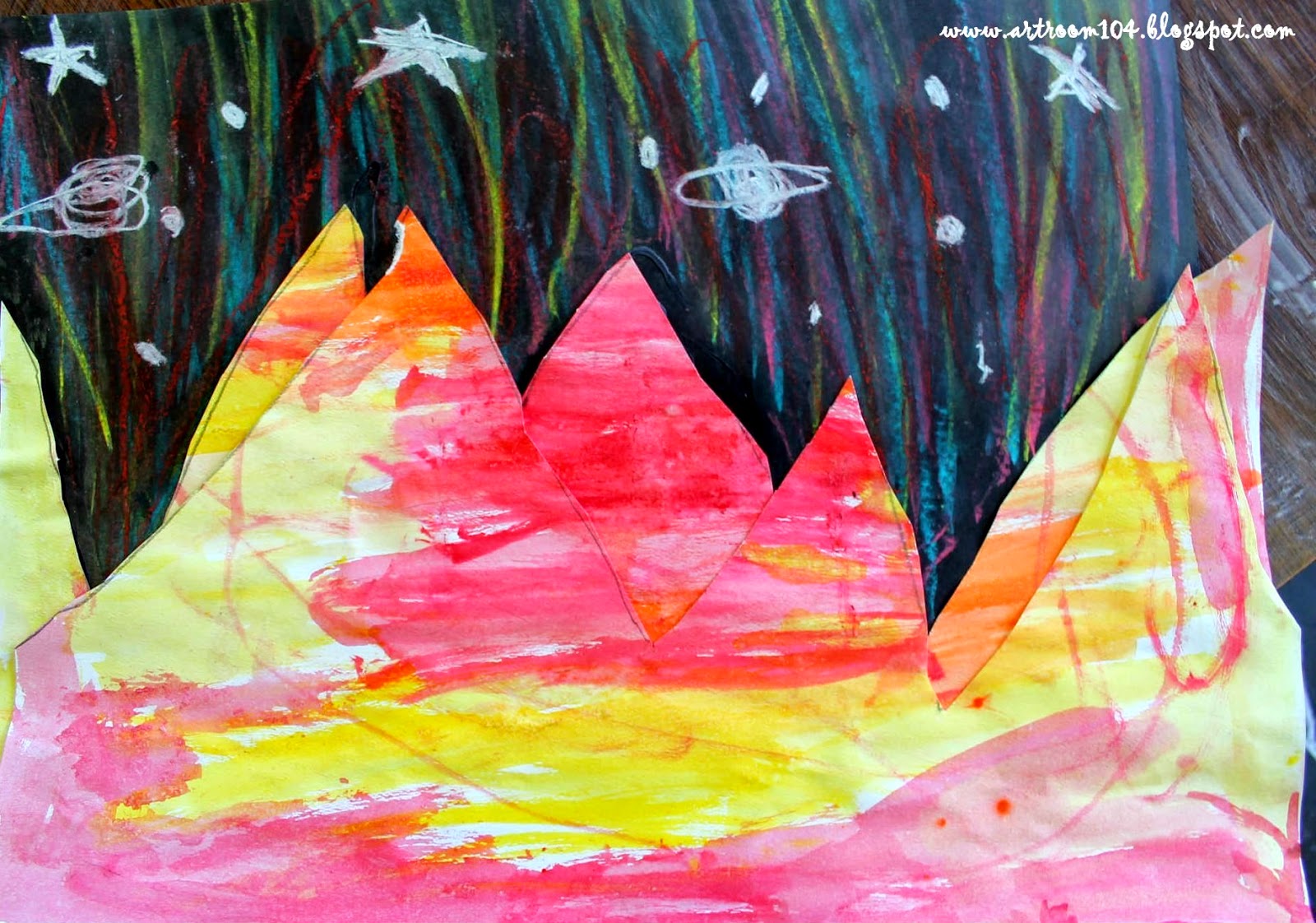 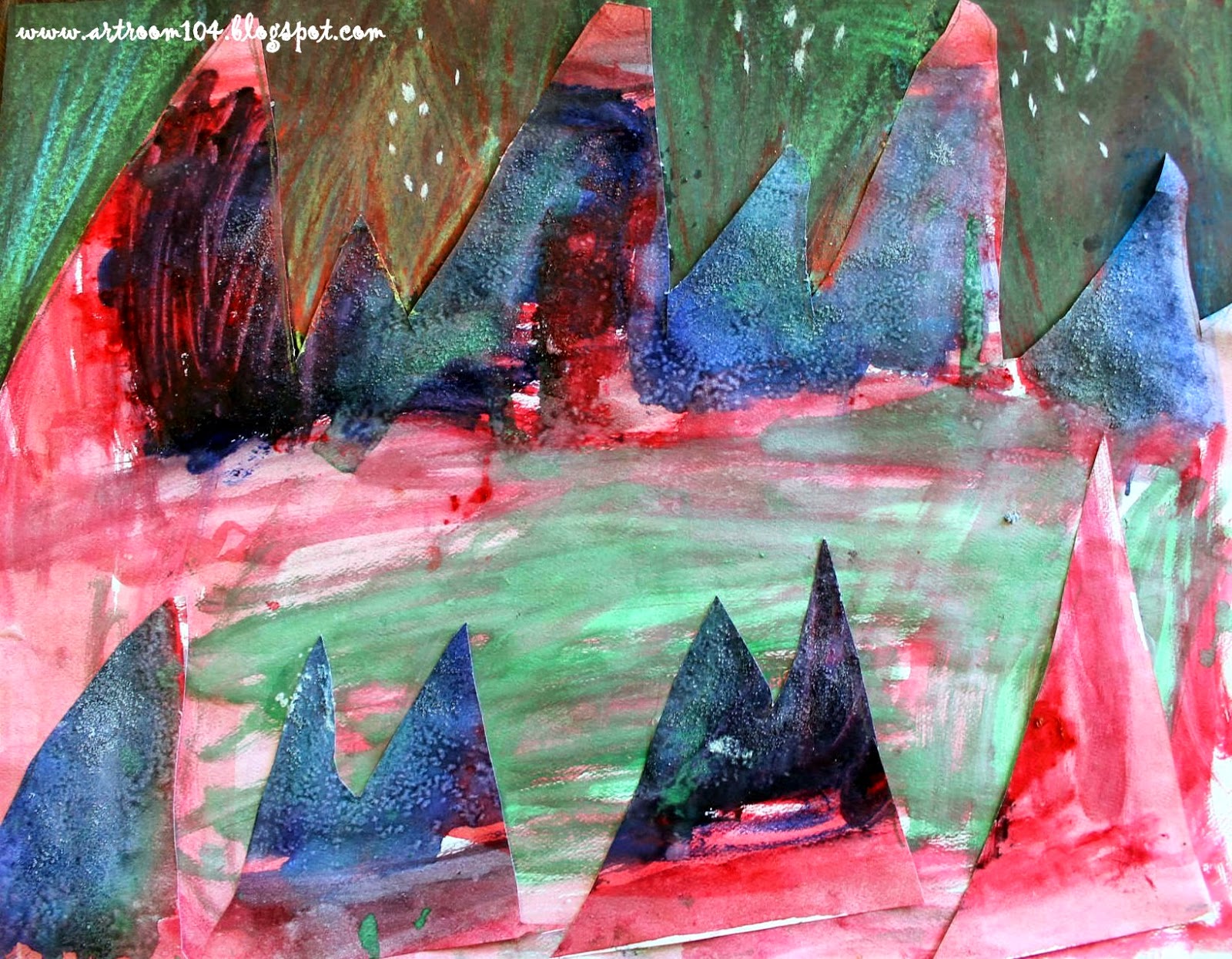 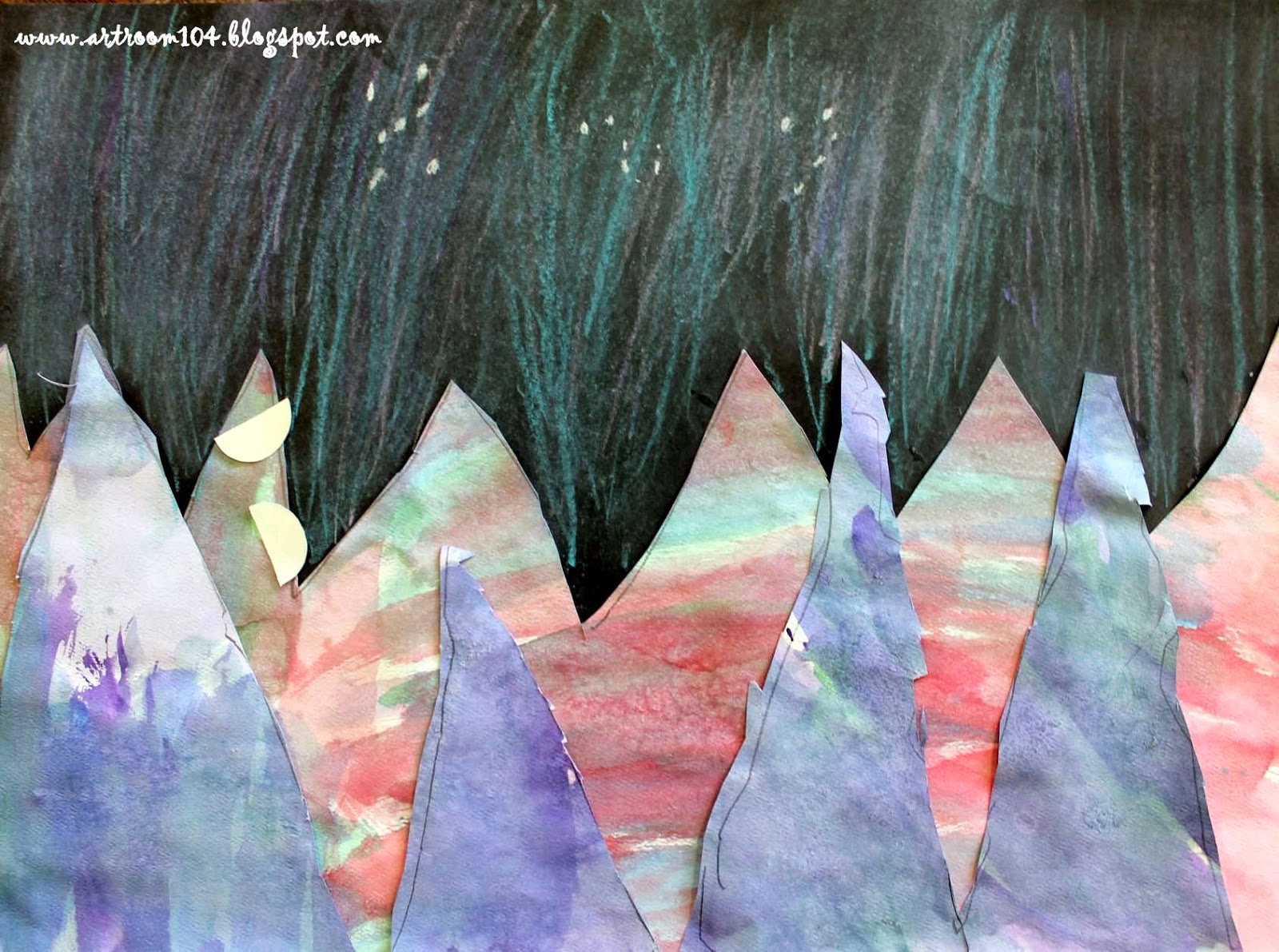 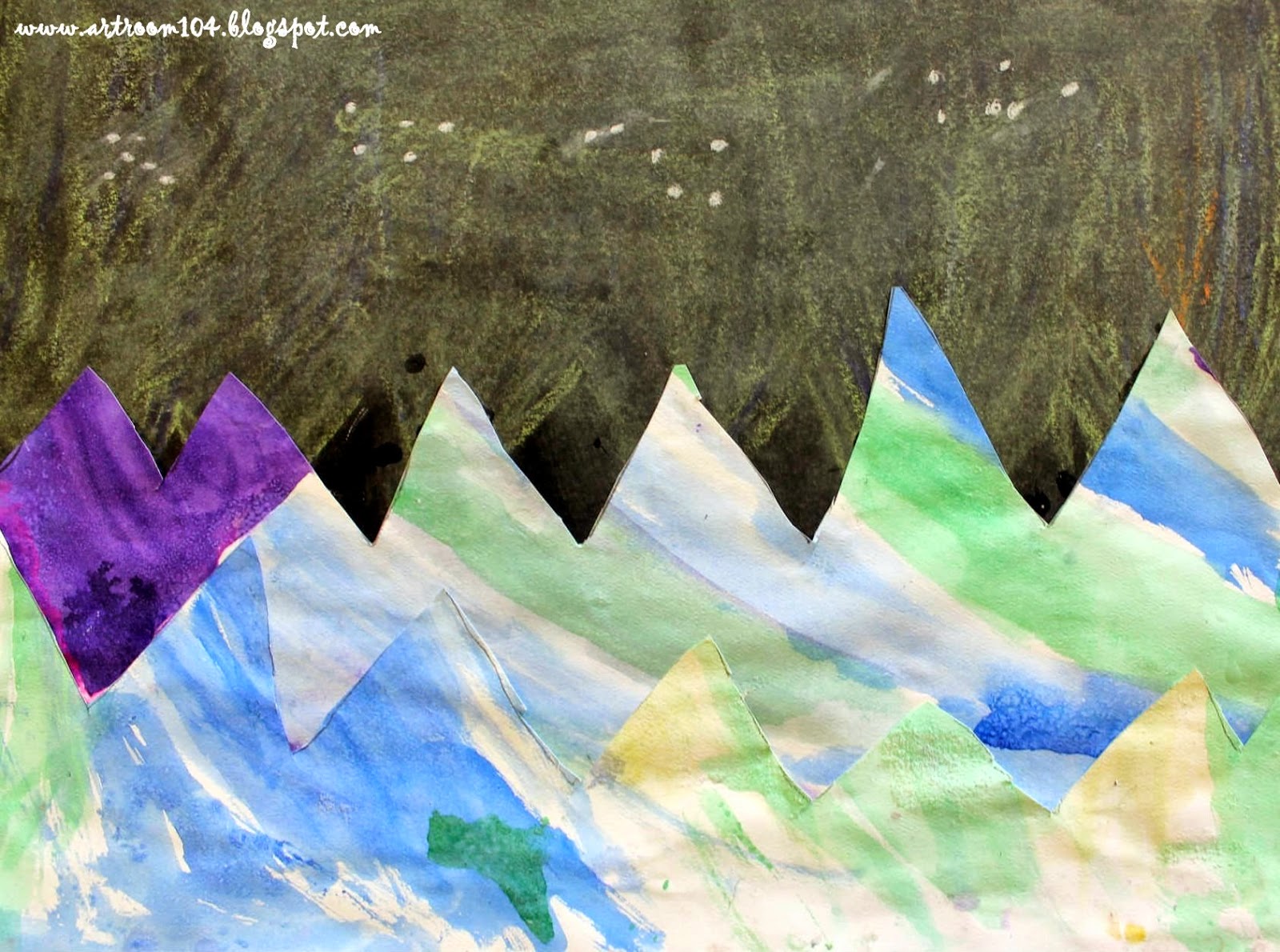 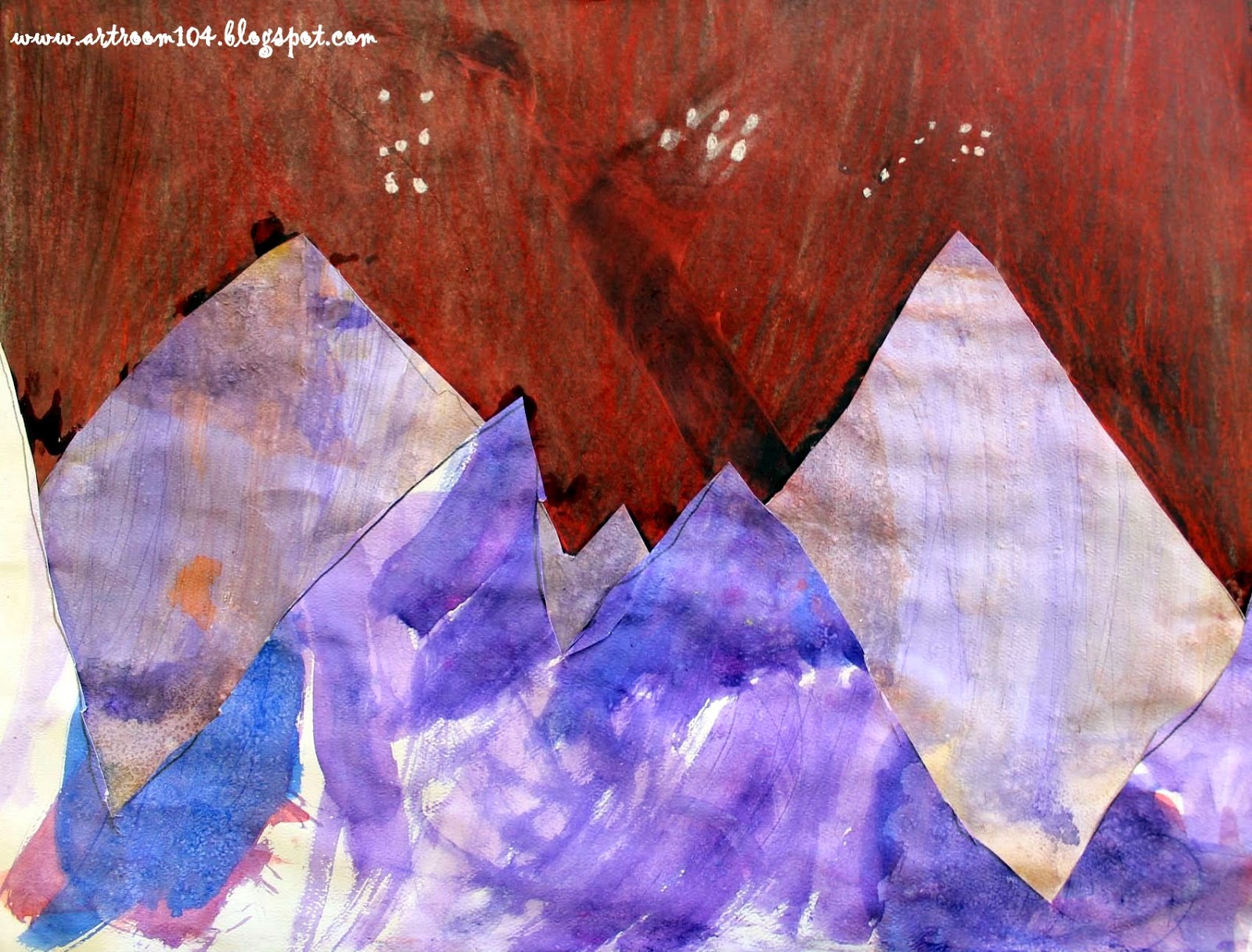 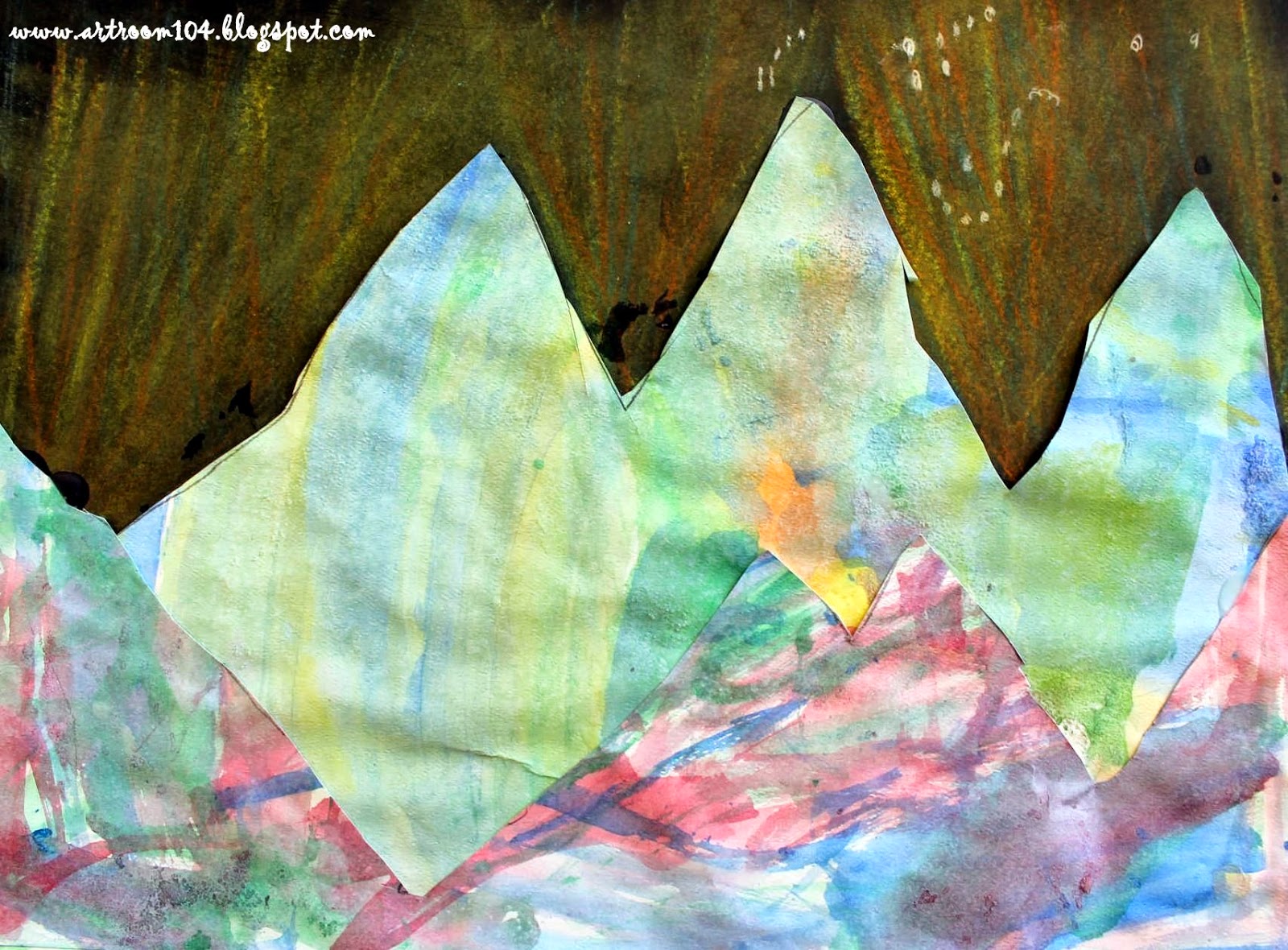 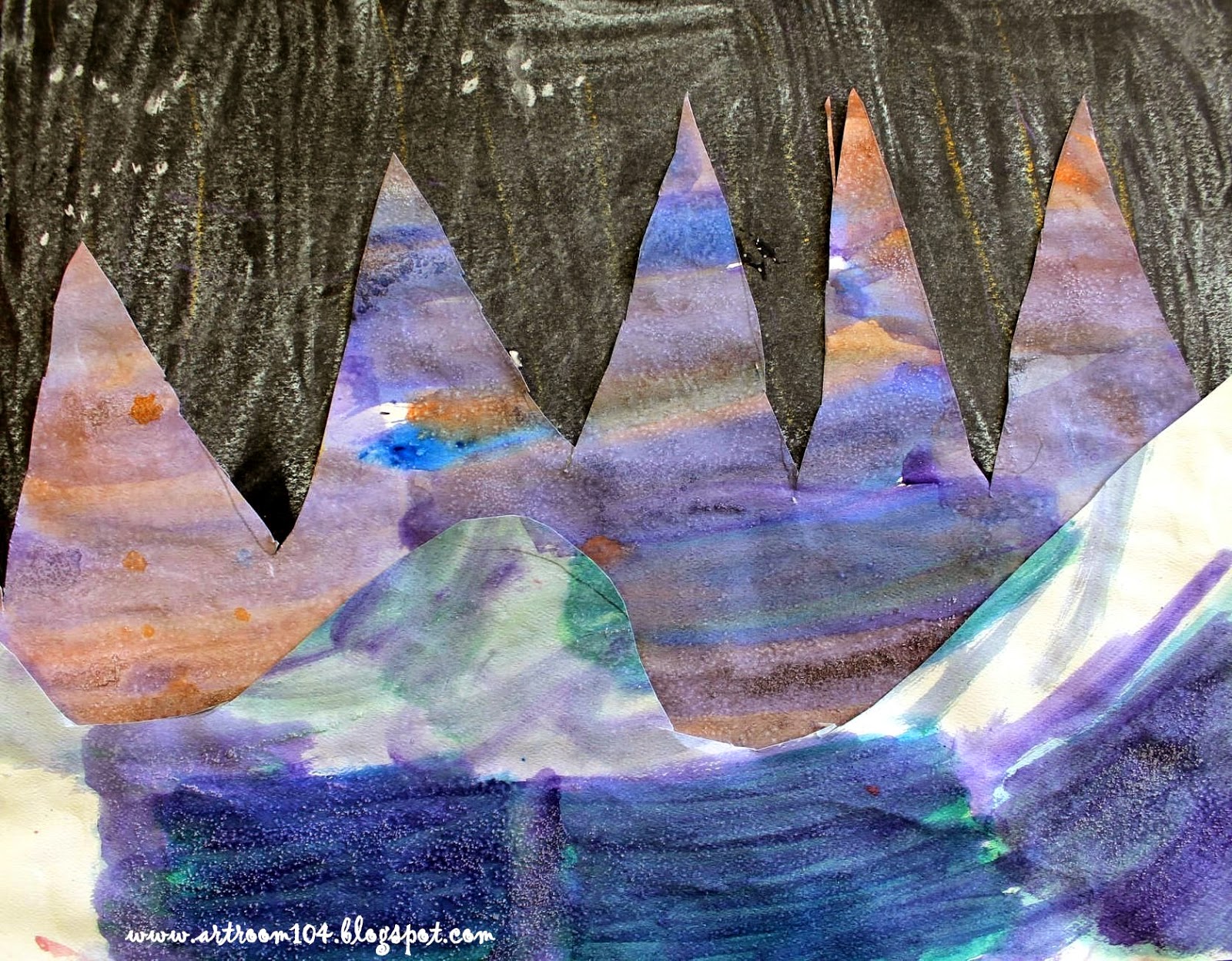 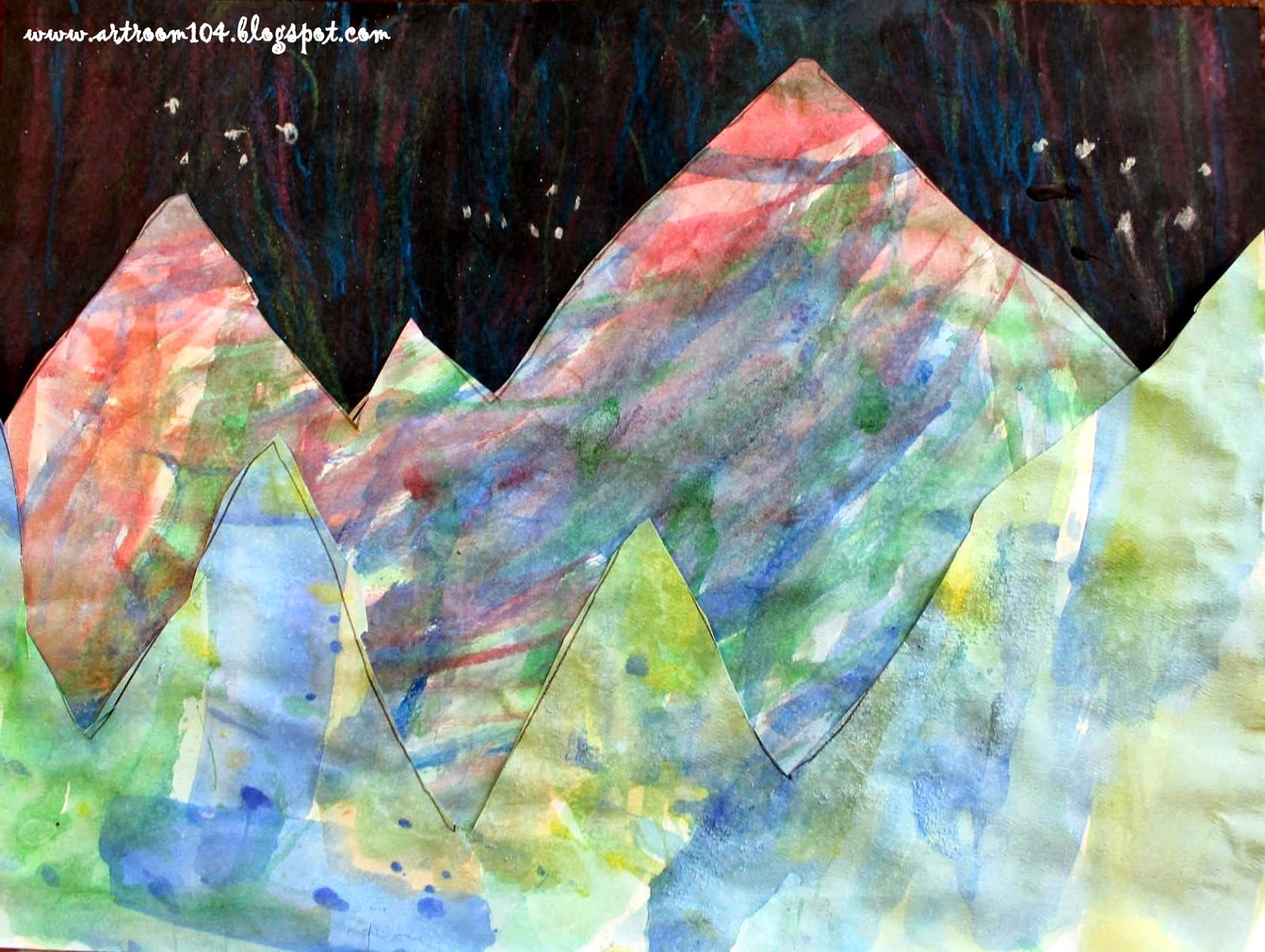