On the tail feathers of our zentangled masters project in Studio Art, I decided to follow-up with a master's painting project.  I figured that this was probably going to be our last big project before the end of the year.  This week ends the 5 week marking period of the last quarter.  For high school in our district, they technically only really attend school for 8 weeks of the 10 week quarter, as the last two weeks are for exams.  So, the rest of the school year will be for review (per student request) and for my exam and post-assessment drawing.

My students wanted to do a sculpture project and a painting project, so I tried to find something that would fit both interests.  Before the spring break, some of my studio students had a little bit of free time to create art while others finished up, and one student created a sculpture using cardboard and paper towel rolls.  I thought that this was something we could all do so I did a little searching on Pinterest.  I found this pin, which showed how to make a 3-D letter out of cardboard, paper cups and masking tape.  I altered it a bit and used the paper towel rolls (which ironically depleted my stock!  Never in my almost four years of teaching now have I ever depleted my paper towel/TP roll stock!) instead of cups.  I then found this pin, which completed my idea for this project. 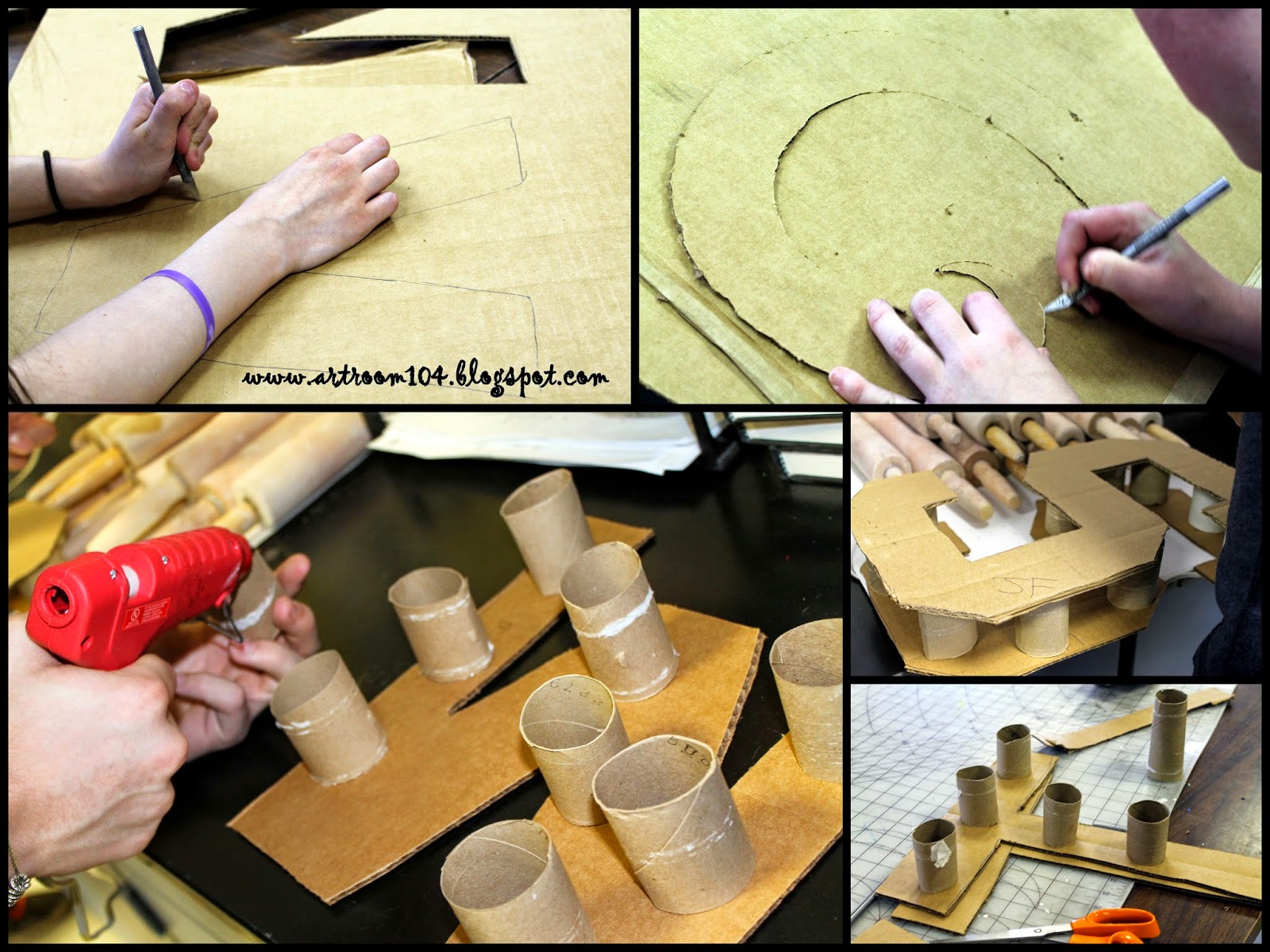 Students covered the sculptures with masking tape (which, much like the packing tape people sculptures we made, took a lot more tape than I thought it would).  Some did a really neat job doing it, which gave them a nice smooth painting surface, while others just slapped the tape on their however they wanted.  One thing I found that we had to do was put two layers on the outside edge, one layer horizontally across and then another layer vertically down to cover any gaps in the tape. 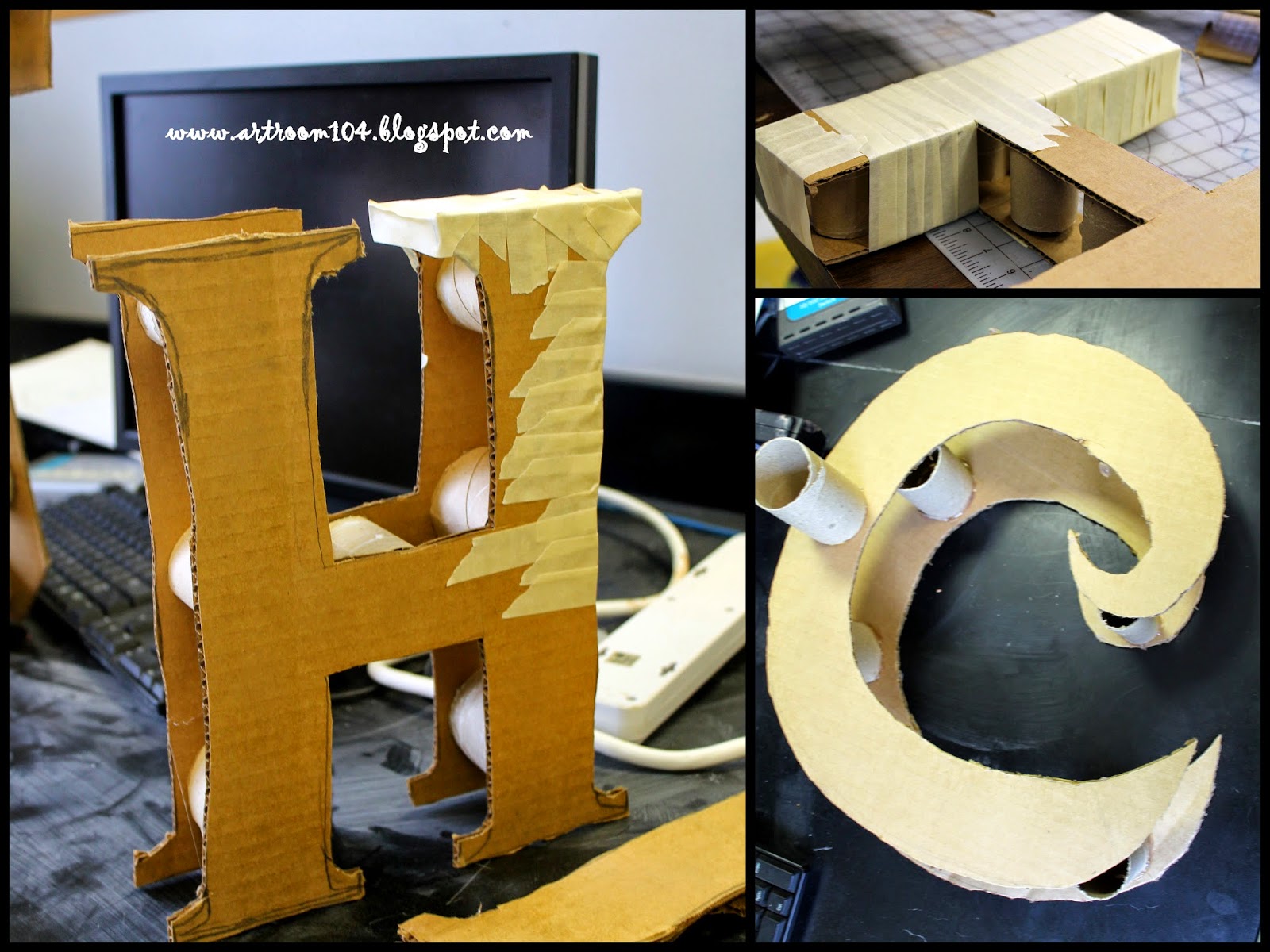 After the letters were taped up, I had students paint two coats of gesso over the cardboard and tape to create a good painting surface.

Here are some in-progress pictures of this project.  It is currently due this Friday, however I know I will have some stragglers who won't finish until later next week.  It's ironic...all the students ever do is want to copy other things in their art but when you ask them to copy a master's painting, suddenly "copying sucks!".  I almost think that this kind of project would be good to use with a group of students who are constantly plagiarizing others in their artwork... 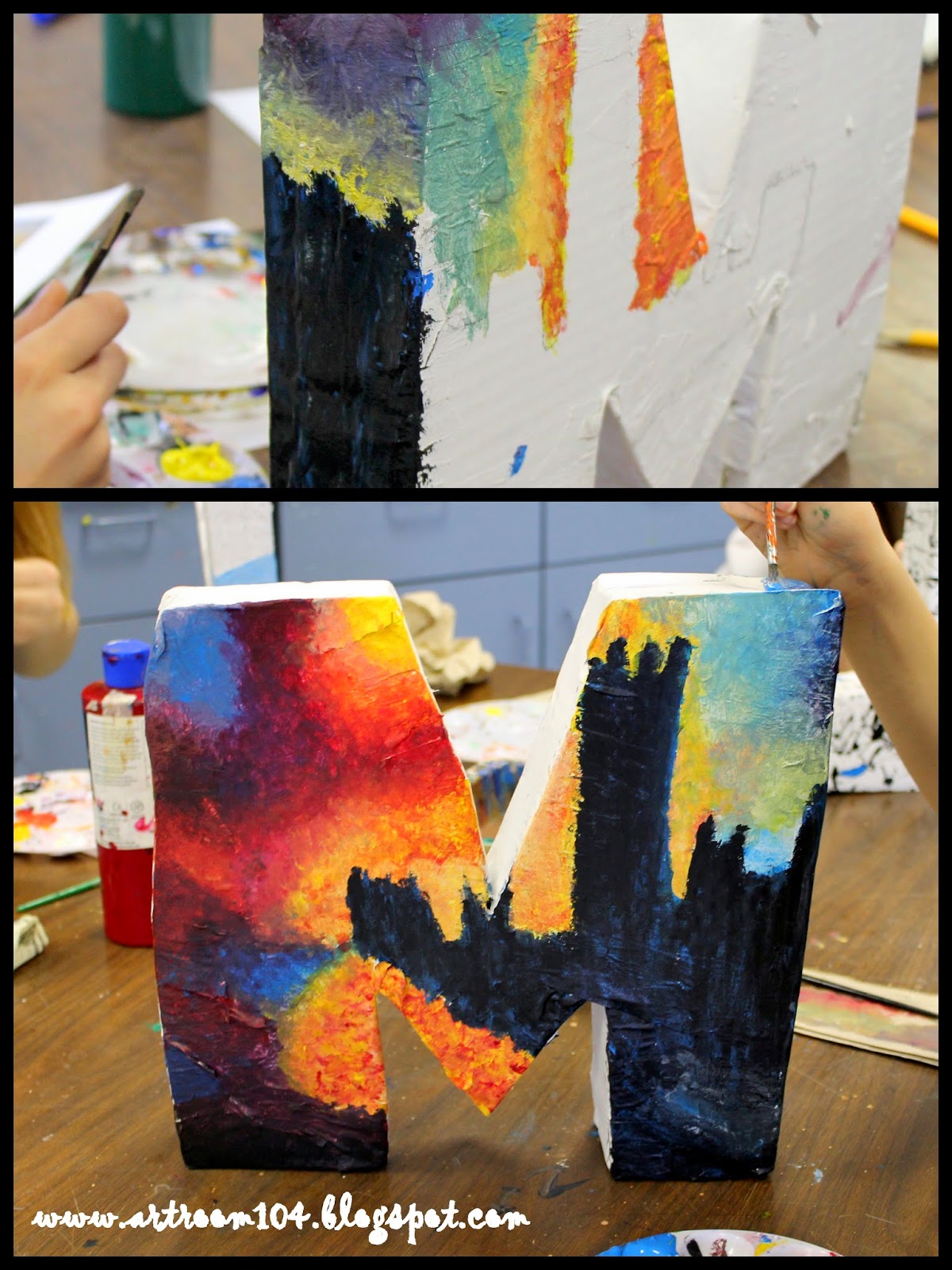 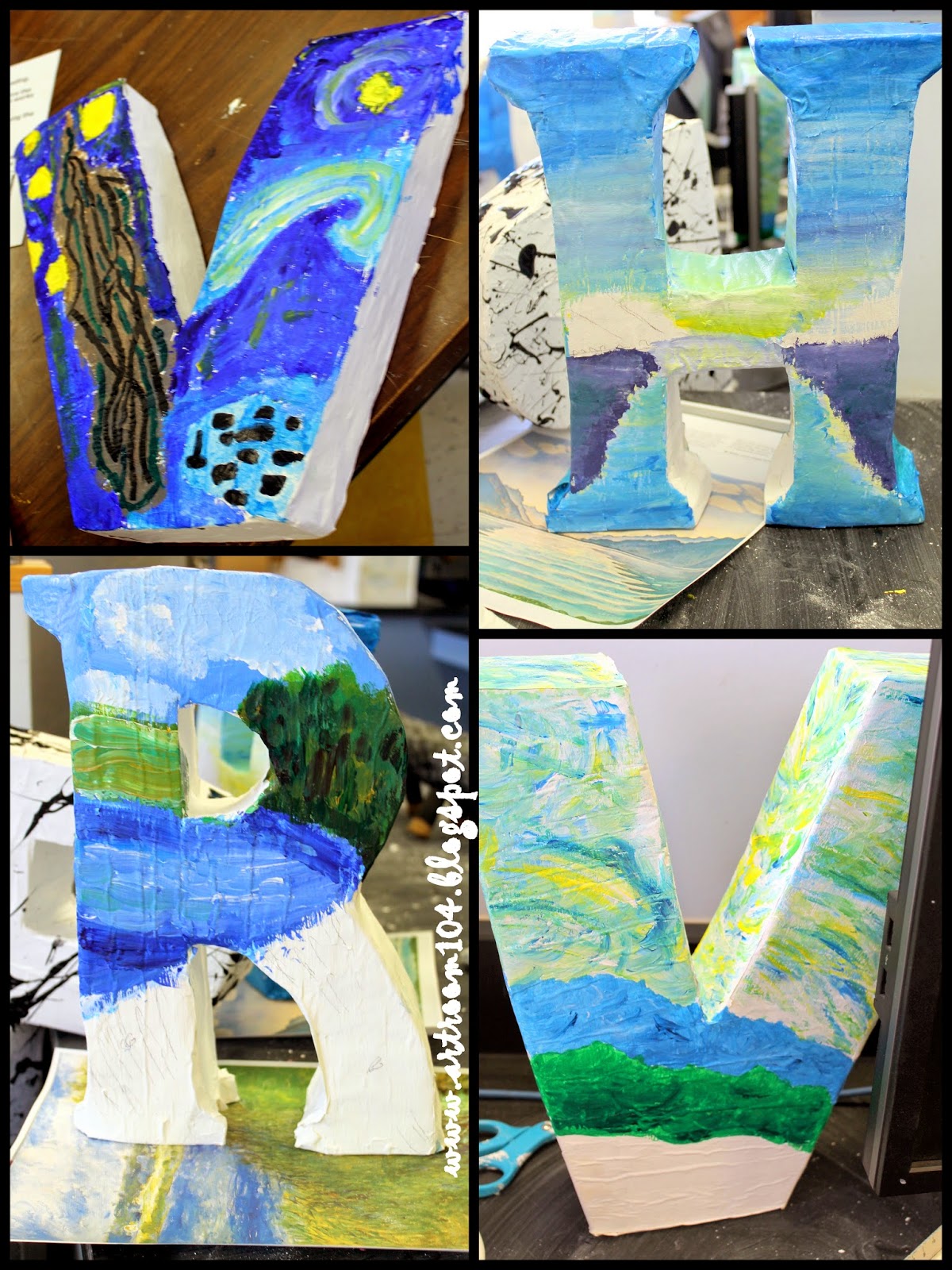 We have quite a few VanGogh's and Renoir's. 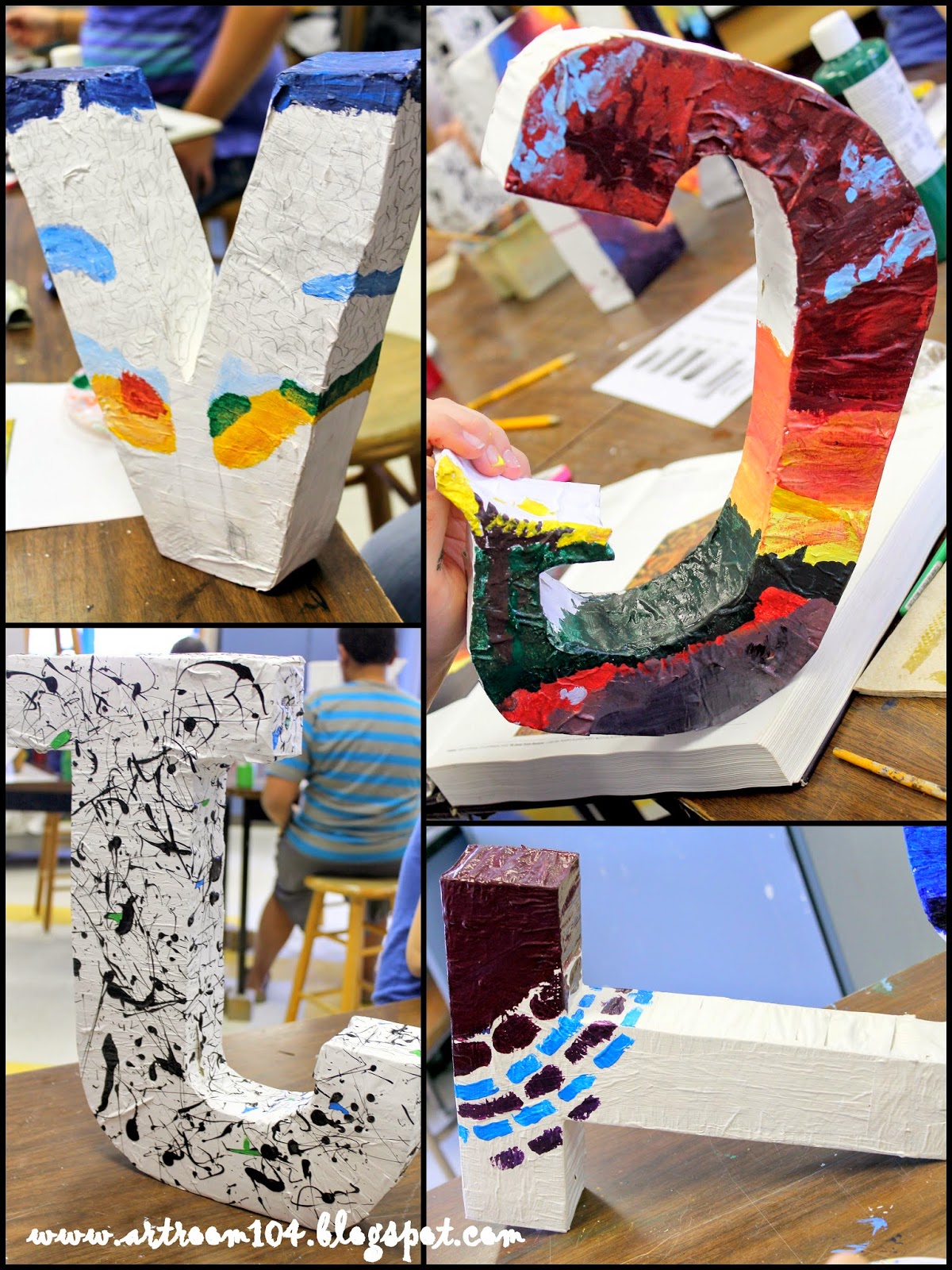 I allowed one person to do a Jackson Pollock in each class, as well as one Mondrian.  I tried to steer the lower students towards those artists.

I also think that this project is a great one to use for impressionism.  I have to say that impressionism is probably my favorite art movement and the style of painting is one that I favor myself.  The students who are doing impressionist paintings are actually enjoying themselves and finding that it isn't that difficult to get the same effect that the artist did!