Wow!  I have forgotten what it's like to have a computer!  Let me tell you...the month of July was not friendly to my family....I think we broke a mirror somewhere and didn't know it!  Luckily, Camille is growing like a weed and my hubby still appears to be in the cancer free zone, however a month after he returned to work, the new management that was hired while he was out for his treatments decided that he just wasn't working out anymore anymore with the new direction they are taking the company and released him from his job.  Big :( .

Meanwhile, we had purchased a pool from Walmart and after setting up and paying the fire company to fill it, a seam burst and we lost all of the water.  Only just this week did we finally get the replacement liner in and the pool filled again.  The A/C went in our new vehicle, I dropped my new Kindle after buying a $60 case for it and shattered the screen (though when I mentioned that I was also an iPhone user after Amazon wanted to charge me $150 for a new Kindle, they were kind enough to send me a new one for free...)...need I go on?

Needless to say, I'm very sorry that I haven't been able to post for a while!  I have SO MUCH to share...not only do I still have posts from the end of the last school year to share, but I also have projects from the extended day program that I worked in the month of July.

First post....light painting!  After my elective class finished their Modern Mona Lisa paintings, we didn't really have much time to do anything super in depth, so I turned to light painting.  First, we experimented with glow sticks in the dark room for a few days... 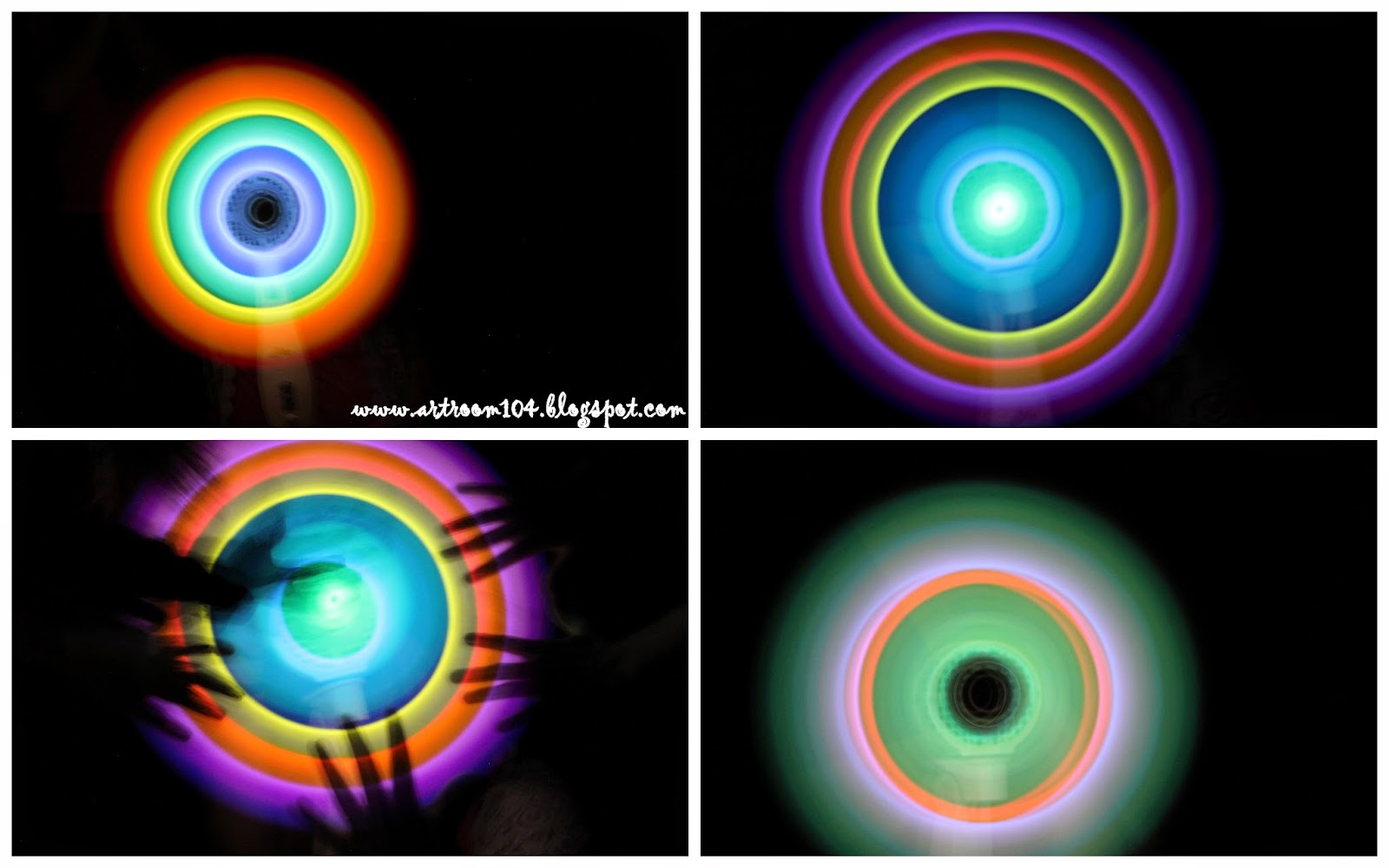 These are glow sticks attached to a fan.  The students took the wire encasement off the blades, taped the glow sticks on, and then let 'er spin!  The picture in the top left is when the sticks were put in rainbow order of course (pink, yellow, green, blue and purple). 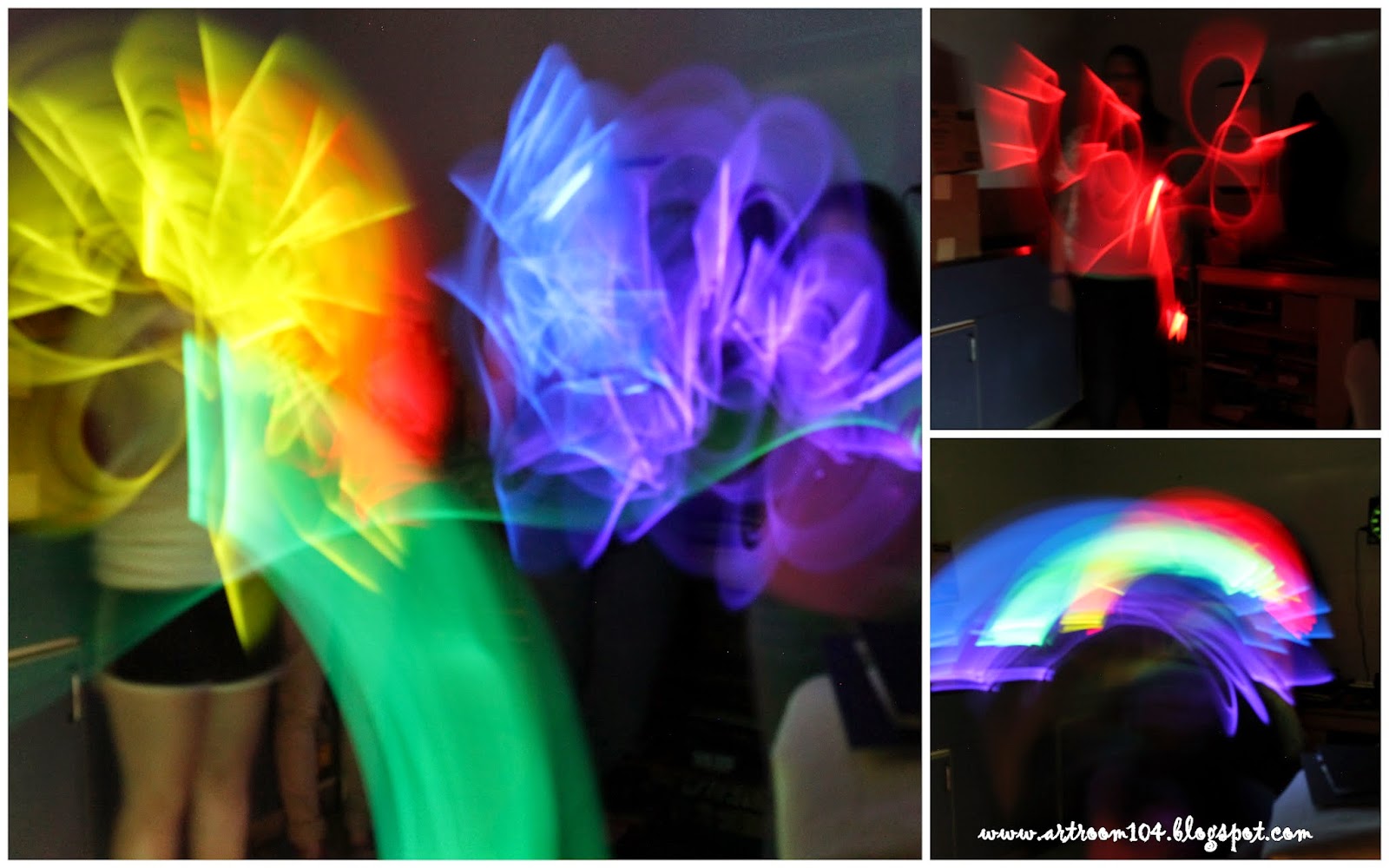 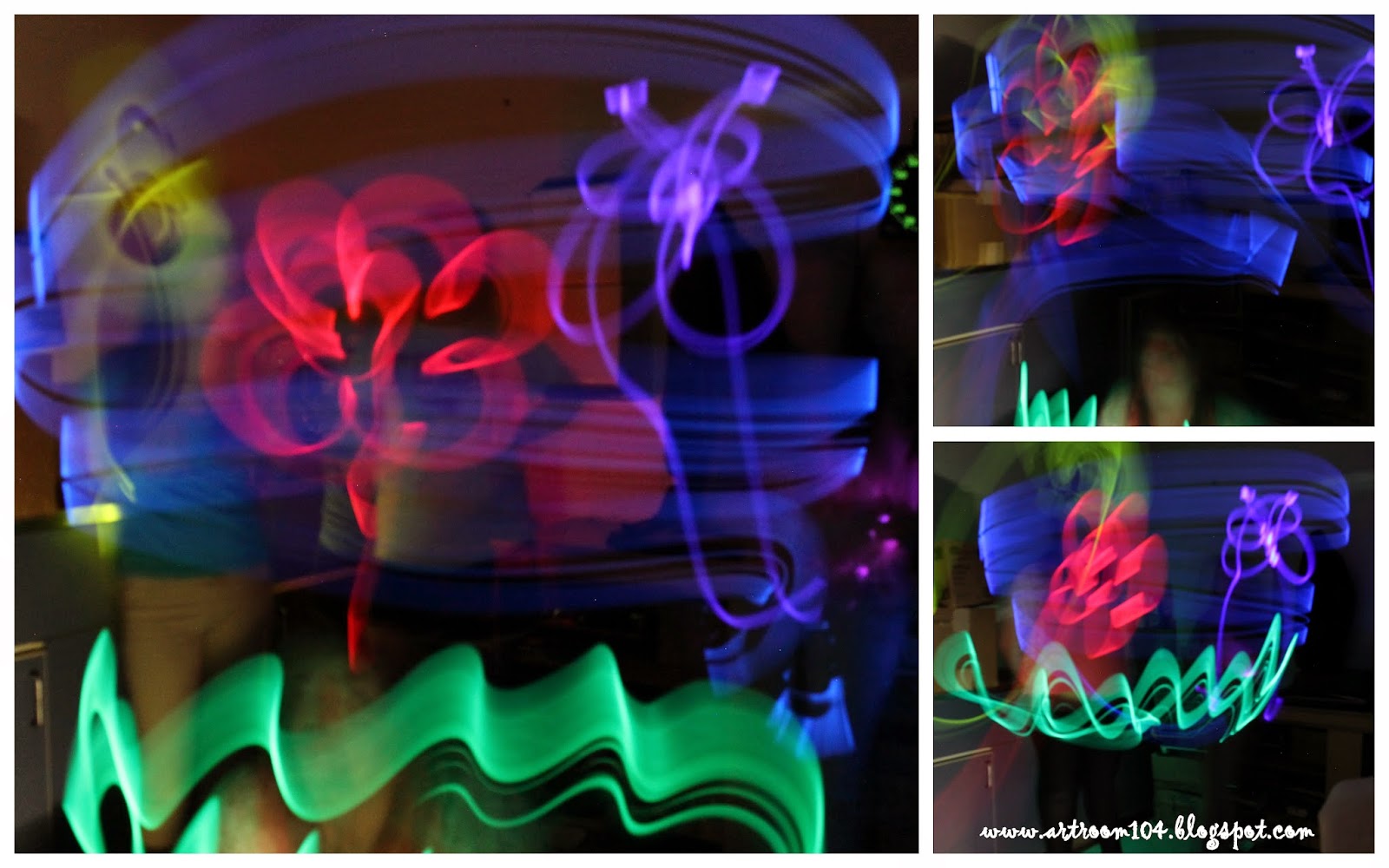 The landscape light painting took some experimentation to get it just right.  They tried doing it all at once, doing the sky first, then last, then first again...The order we did things for the final, "good" landscape, which is the bigger picture in the collage, was the green grass, blue sky, yellow sun, the flower and then the butterfly.  All the students stood in a group in the same spot and one person at a time did their color.  It was easier to get things lined up with them all standing together. 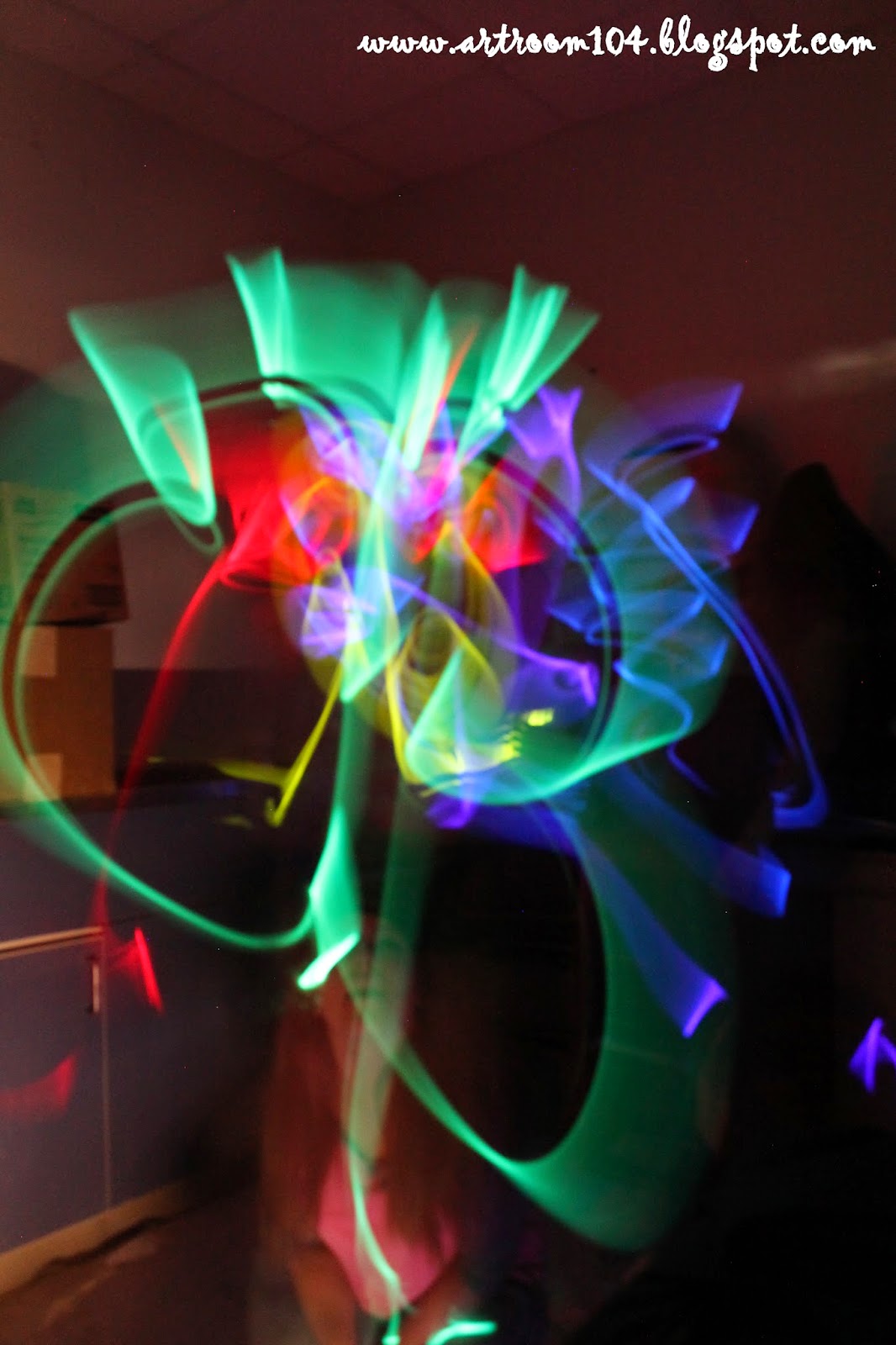 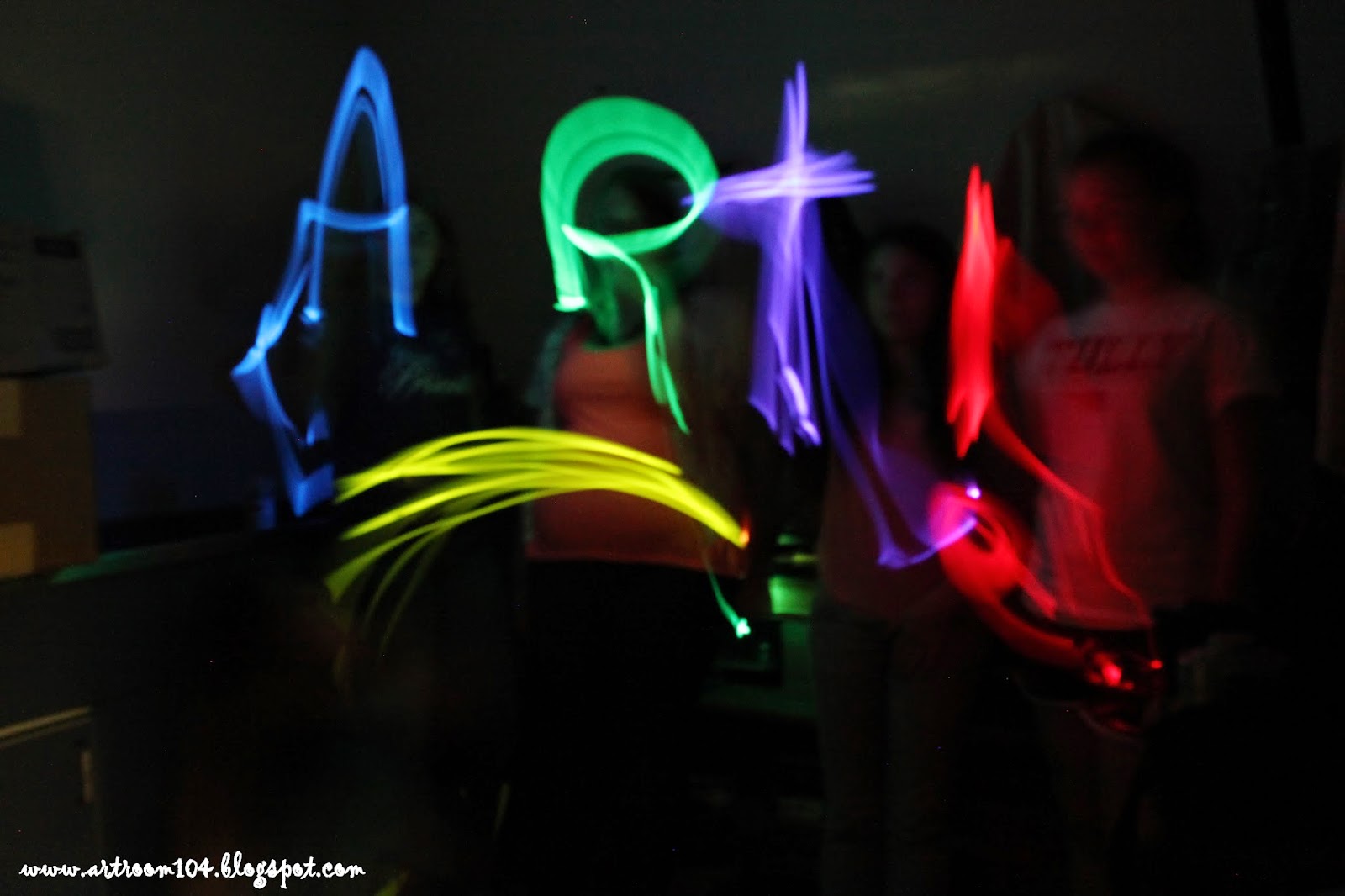 Remember to do your letters backwards if you're using glow sticks, so that they can be read in the picture!

For our last bit of experimentation, we got permission from the superintendent to come back on school grounds to do this at night outside.  We got to school around 9:00, but couldn't really do much of this until about 9:30.  For these photos, I had light-up Frisbees that the ladies used. 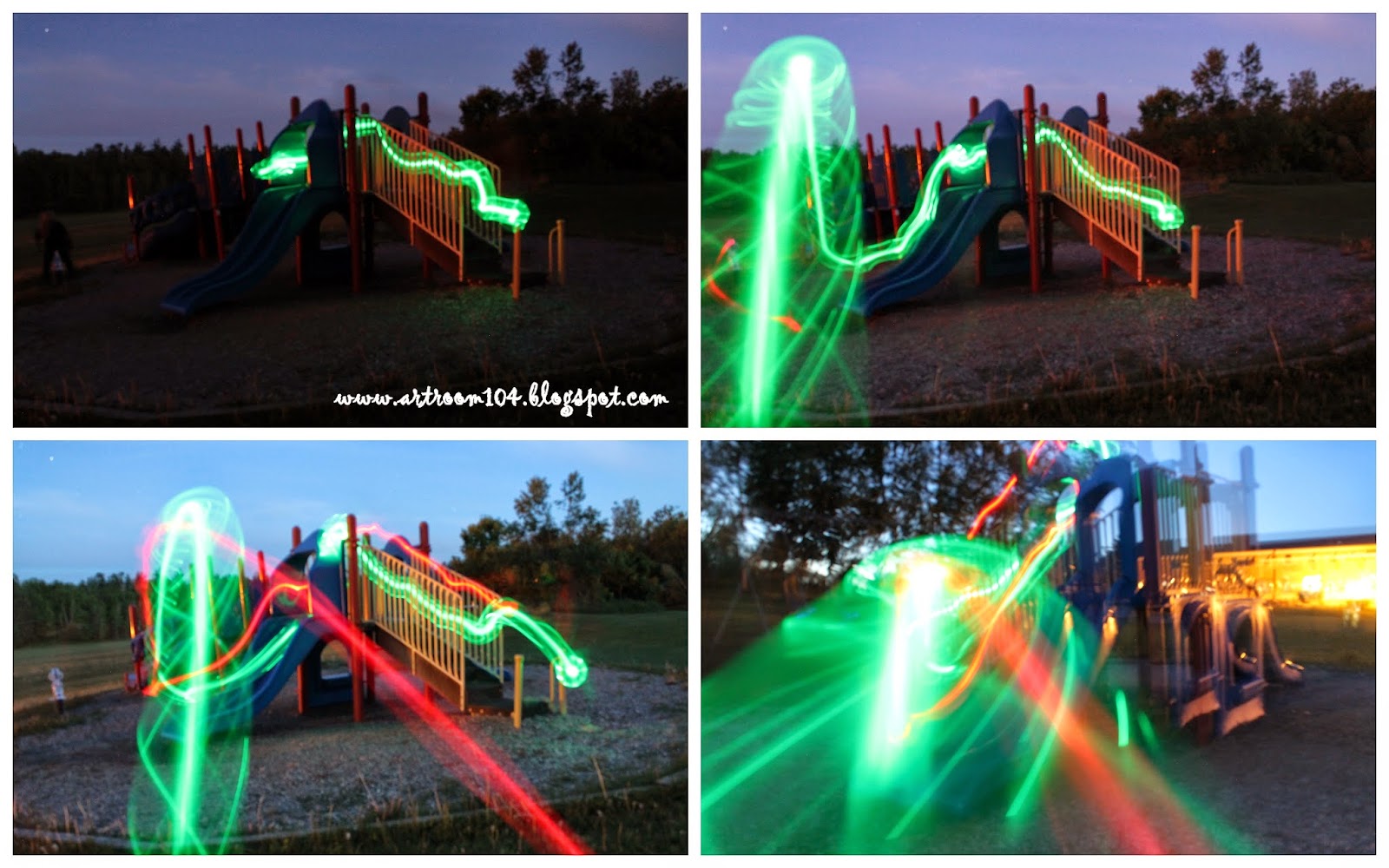 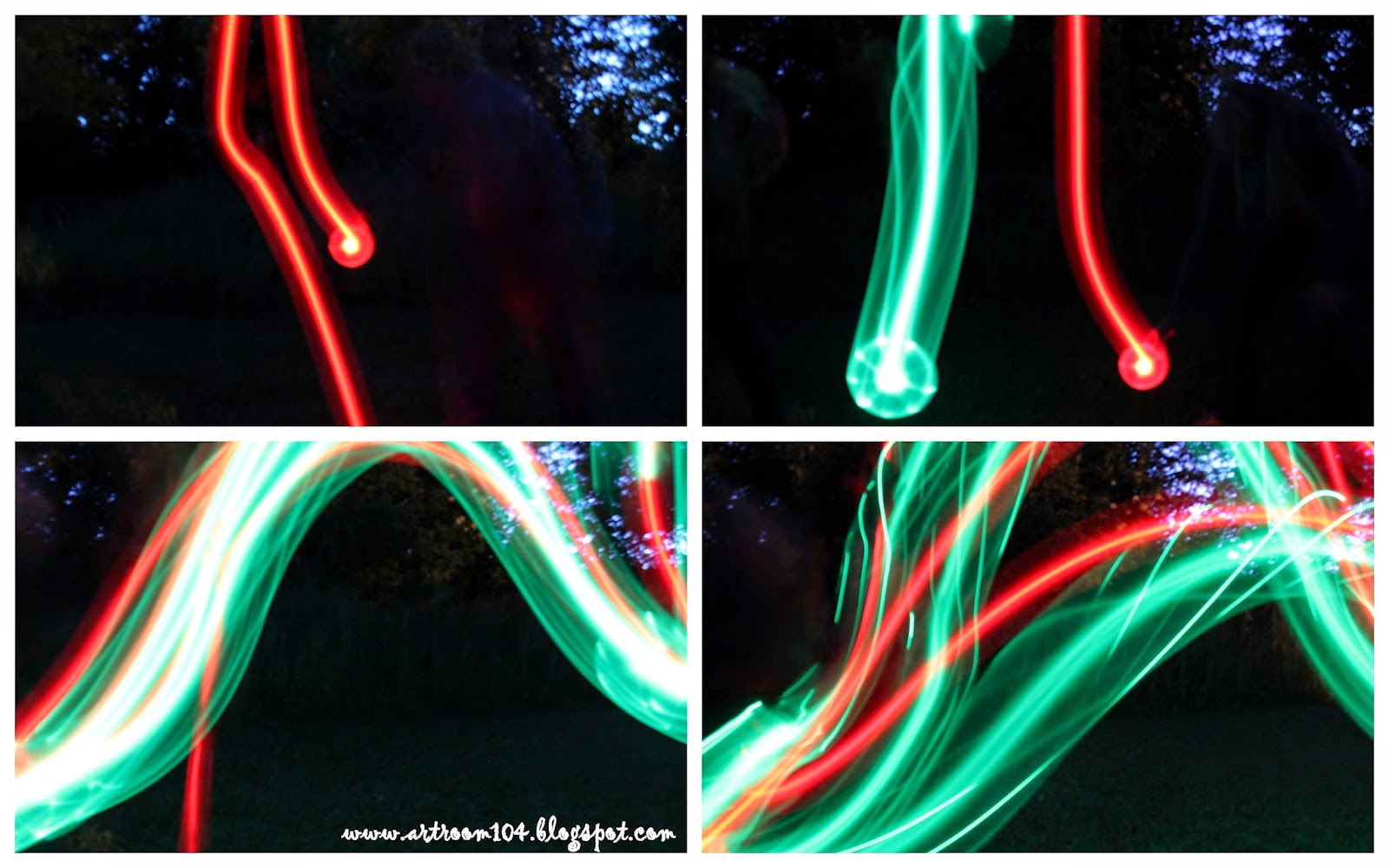 
And more glow stick fun...In the bottom right picture, one student wrote her name but it's backwards to the viewer because she wrote it the write way from how she was standing. 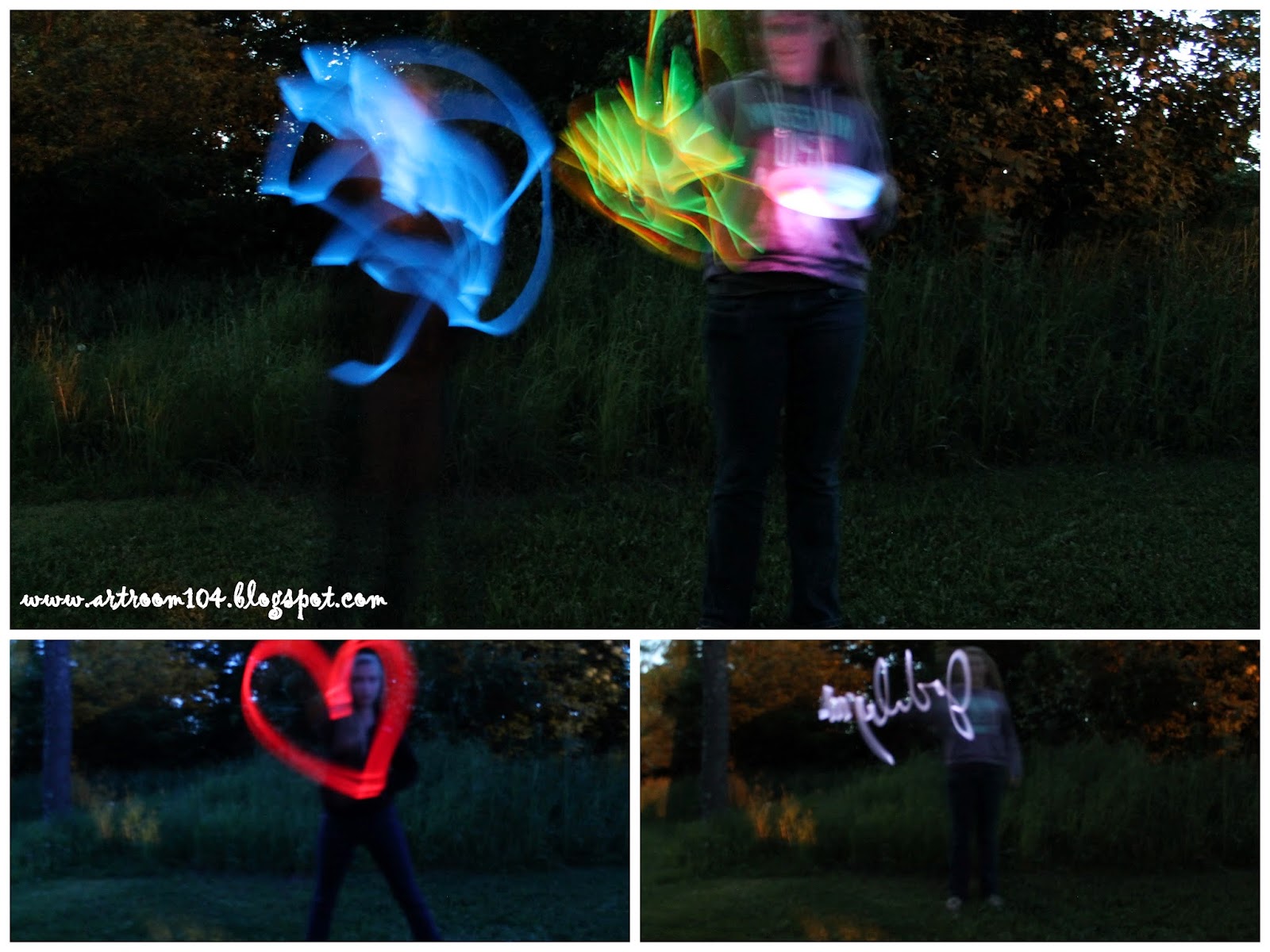 I really enjoyed fooling around with these.  I used my tripod and my DSLR camera.  I put it on manual, opened up the shutter for anywhere from 10 seconds to 25 seconds.  I also had to turn off the automatic focus.  Even though the night pictures outside look like it was dusk, it was actually very dark outside.

It is my goal this year to get multiple colored laser pointers.  I have a red one, but I want to see if I can find laser pointers in an assortment of colors.  I think there is a lot more that could be done inside in the darkroom on the wall with the laser pointers.
Posted by Mrs. Impey at 1:40 PM