My sixth graders have just finished up their first project, which was, of course, cave art!  When talking about curriculum for my elementary grade levels, sixth grade and kindergarten are really the only two levels where my projects tend to remain the same each year, and it really doesn't bother me either!  (Ask me about my high school curriculum?  It's ALWAYS changing!)

Don't get me wrong, I have yet to do cave paintings the same way more than once, but the premise is there.  This year, students received a huge piece of brown kraft paper.  We tore off the edges, crinkled up the paper, and then took it outside to create our rocks.  We used neutral chalk pastels to rub over the crinkled paper, and then used a paper towel to rub and blend the pastels together. 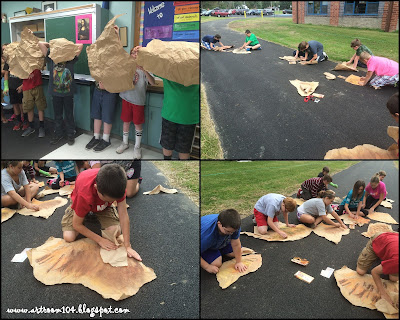 I HIGHLY suggest doing this process outside, as the chalk pastels tend to get really dusty.  Interested in seeing a previous years technique for creating our rocks?  We have used tempera on tag board in the past as well.


Now, here comes the fun part, where I kind of changed it up for my students a bit.  Once again, we did make our own egg yolk tempera paint.  If you're interested in seeing specifically how I do it with them, you can check out one of my blog posts from a previous year here.  Here's the adaption for this project from this year!  I did the best I could to turn my room into a cave!!  I pulled the blinds, covered up the cracks with black paper, and did my best to turn it into complete darkness.  Then?  I put a bon fire on my smartboard as their light source for painting! 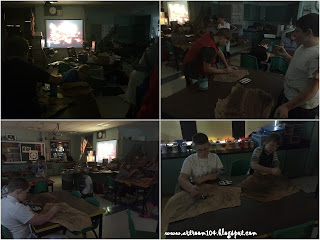 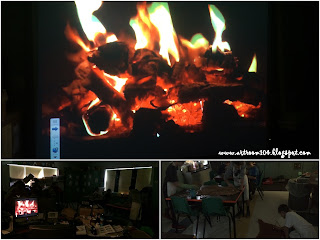 These pictures aren't that great at showing how dark it was, but it was dark enough!  It was a bit comical too, as students started complaining that there was too much light coming through the windows and that this wouldn't work, but once all the lights were off and they had to work with just the fire out the smartboard, they found it was pretty difficult to see to paint accurately.

This was a super great experience for them and I definitely plan on incorporating the bon fire next year as well!  There was a lot of conversation about the actual project and the way they were painting.  Many noticed that their paintings got a bit better as their eyes adjusted to the darkness.

As for the bon fire video, it's pretty easy to find them on YouTube!  The video I used was actually an 8 hour video of a bonfire.  This is the specific video I used below.  It's nice and quiet, nothing distracting in the background...just the calming sounds of a bon fire crackling away!

My goal next year is to actually use real charcoal, dirt and berries to create the paint.  I never seem to plan well enough in advance but I will next year!! 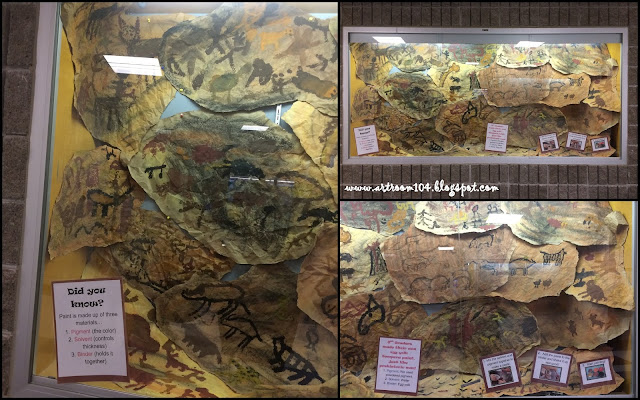