Sixth graders have finished their cave walls!  Last year I didn't get to do a cave art project with the students because they breezed through the unit in social studies and started right in on the Ancient Egyptians.  This year, I made sure I started this early, so as we have finished this up in art class, the students are just starting cave art in social studies...perfect timing!

Tomorrow is parent-teacher conference night so we managed to get this done just in time.  Unfortunately, I couldn't get the paper into those nice display strips I bought last year through the Parent's Association, but they were still useful to tape up the cave walls on.  (The crinkled paper just wouldn't slide in the strips!) 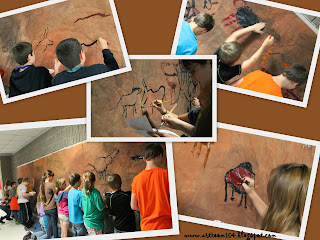 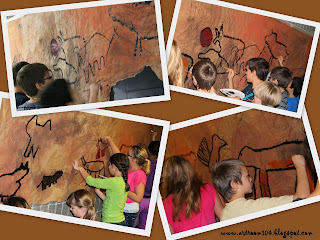 This project took us a total of about 2 1/2 class periods to complete.  On the first day, which was essentially the half day, I showed my power point about prehistoric art and we did the virtual tour of Lascaux Cave on the smartboard.

On the second day, we unrolled and took a huge sheet of brown butcher paper outside on the sidewalk.  I had the students all line up on both sides and in pairs.  Then then slowly crinkled and unfolded the paper to give it physical texture.  Next, we took natural colored chalk that I have and rubbed it all over the wrinkled paper.  Using paper towels, we wiped it to blend all the colors together.  One class did a better job blending the colors than the other, but then the other class did a better job (in my opinion) of filling their cave wall with large cave paintings! 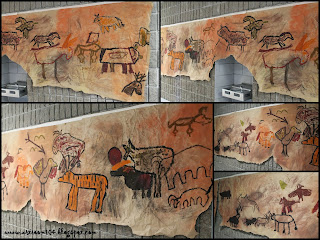 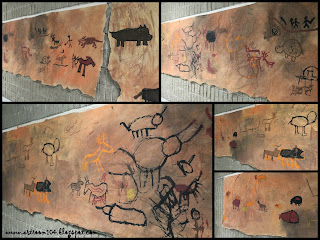 On the third day, we took about 15 minutes to talk about and mix our egg yolk tempera.  I gave each table four cups.  One had pigment in it, two were empty, and one had the egg yolk.  I sent one person to the sinks to fill one empty cup and get a paint brush for mixing.  In the other empty cup, I asked them to fill it about 2/3 full with the powdered pigment I gave their table.  Then, they had to slowly add water to create a paste, about the consistency of tooth paste.  Lastly, I had them add the paste mixture to the egg yolk, mix and shake. 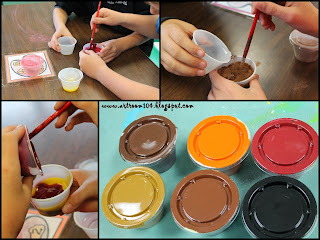 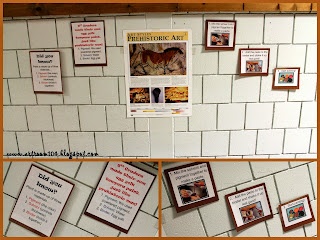 I added these signs on the wall across from the cave walls...

My first year of teaching, I actually set up a real "cave" for the cave art we did.  That year, I had the students rip the edges and then crinkle Manila tag board.  We painted them with tempera and then quickly rinsed the tempera off the paper before it dried.  This created a similar effect to the chalk.  That year, we didn't make our own paint.  Then, I also had the students use chalk and paint on rocks to create a painting on an actual rock.  I set up my easy-up tent in the media center (I only put it up about half way) at our school and then attached blankets all the way around.  I pinned up all of the cave art inside on the blankets, laid the rocks down at the bottom along the edge of the blankets, and then set a lantern on the outside so people could crawl in like a real cave to view the artwork.  It was a huge success, but A LOT of work!  I set it up the next year for our art show as well (if you check out the 2012 Art Show page, you can see two pictures that sort of show the cave.  One shows a "cave man" inside the cave (it's a dark photo) and the other shows our other "cave man" standing outside of it!)
Posted by Mrs. Impey at 12:18 PM