Not wanting to chance our luck, hubby and I decided to take advantage of the gorgeous weekend we had this past weekend and take the pooches out for a walk at one of the local state parks.  Probably one of the last "mini" hikes I'll be able to do in the next month and a half...I was exhausted by the time we were done (and so were the dogs, which was good!). 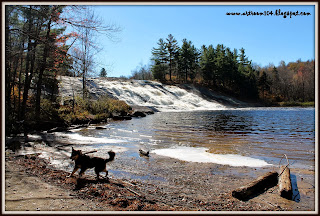 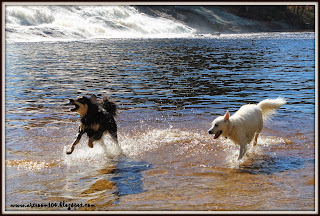 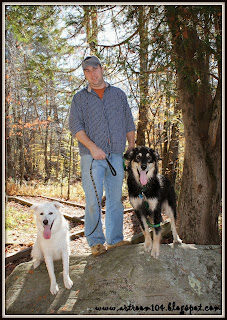 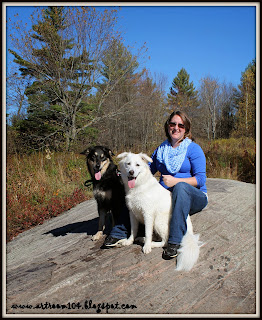 Since I spent a majority of my weekend being lazy, I'm spending this rainy Columbus Day getting all of this week's schoolwork done.  Tomorrow I have my first observation, which I anticipate should be no big deal.  Even though I received tenure last year, I happen to have a formal observation this year again because my number happens to fall in this APPR year to have it done...my other two observations will end up be unannounced walk-throughs.

I wanted to also touch on my Art 7 graffiti unit in this post.  In typical fashion with this particular group, it is taking them FOREVER to complete projects!  In my opinion, it should have taken them two days to get their practice tag completed, but some of them are onto day 4!!!  I really don't know what to do to push these guys along...I had been hoping to be onto our next unit by now, but we haven't even started their sketchbook cover tag yet!  This group is probably the toughest group I am encountering this year.  I'm not sure if it's because their comfortable with me (from having me as an elementary art teacher the last three years) or if it's because they still treat art class like it's a special, but we have spent many a class periods being lectured about behavior, showing up on time, being prepared with notes, sketchbook and folders, being respectful to each other, etc. etc. etc.

I ended up giving them a pop quiz one class period about graffiti because I just couldn't deal with trying to make them work!  For some it was an eye opener because I took their quiz grade and put it in for their 5 week grades and I think they finally started to take my class seriously.

The only good thing I can say about them taking this long is that they have absorbed all of the historic information about graffiti like a sponge!  We talked in depth about Scape Martinez, Bansky, Keith Haring and Taki183, comparing each person's individual start in graffiti, and I'd say about 85% of the students have it down!

One of the homework sketch assignments I gave students was to design a shoe with graffiti influence.  This was an extremely successful sketch assignment, for the most part.  I had the highest number of students take it seriously and spend a decent amount of time on the sketch, which made me extremely happy!  I took this sketch assignment straight out of the Graff Workbook I had bought by Scape Martinez.  I photocopied the sneaker from the book and handed it out.  Students were allowed to trace the shoe in their sketchbook or draw a different kind of shoe.  I had hoped more people would draw a different shoe, but I'm at least happy with amount of effort that was put into these, despite the tracing.  Quite a few used their tag designs in their sneakers, but others really got creative... 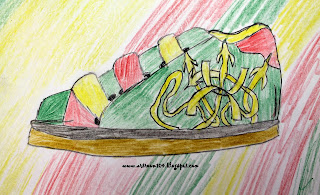 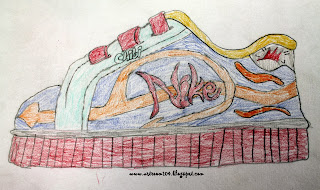 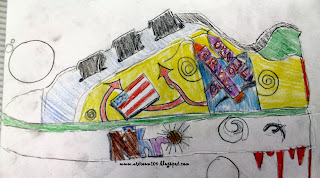 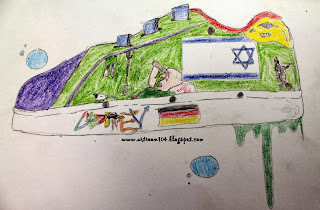 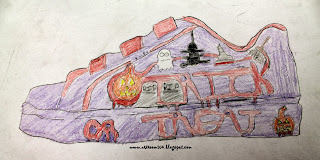 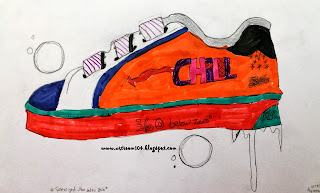 By Wednesday this week, they need to have their practice tag finished (which is going up on a fake brick wall in the hallway) and they also need to gesso their sketchbook cover.  So, hopefully by Wednesday, I'll be able to share our graffiti brick wall!  Their homework assignment this week will be to take the feedback they receive from their graded rubric on the practice tag and draw their finalized tag on their sketchbook cover. I'm really going to push that they only take two days to finish their sketchbook cover tag so we can move on.  Our next unit will be about perspective, which connects with 7th grade Common Core math (more specifically when talking about proportion).
Posted by Mrs. Impey at 7:48 AM