The second project that has just wrapped up on the elementary end is with 2nd graders.  As I mentioned before, the first NYS Common Core Listening & Learning strand they did was about fairy tales.  After perusing the fairy tales they talked about in class, I settled upon using Beauty and the Beast.  I knew I wanted to make a castle with them, but needed to figure out a quick way to do it while being able to talk about fairy tales and art.

So, on the first day, we reviewed the components of a fairy tale (fiction, has magical beings, usually has royalty, teaches a lesson, etc.).  We summarized the story of Beauty & the Beast and picked out the fairy tale aspects of the story.  That took about 10 minutes.  Then, I took students down the hall to the school foyer to talk about stained glass windows.

We are VERY lucky in our district to have a real, Louis Tiffany, stained glass window.  Before the 90's, our district was actually two districts, the Knox-Memorial district and Edwards district.  They were later combined in 1989.  Seymour Knox, a native of Russell, NY, was a millionaire merchant and benefactor who commissioned the window in memory of his mother and then donated it to the Knox Memorial school in 1913.  It is meant to represent the beauty of the Adirondacks.  This window used to be on the outside of the school and from what I've heard, was beautiful when the sunlight shone through.  Now, it is settled behind protective glass in the foyer of our school and is lit from behind.  It's still stunningly beautiful to look at and a lot of our students don't realize that this is an artwork made by a famous man and company!  I always try to do a few lessons a year where we can talk about the important history of this window at our school. 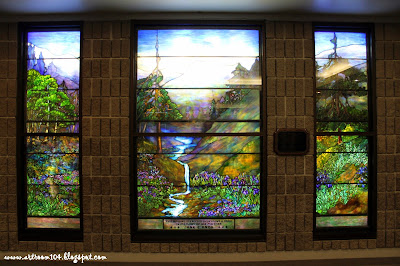 Back to the project...we talked about the characteristics of the stained glass window and how it was put together, the colors of glass used, etc.  We went back down to the room and I gave students the objectives for the remainder of class.  They had to trace a circle tracer and design a symmetrical stained glass window for Beast's castle.  I had them do this on Manila paper first in pencil, and then after I approved their design, they traced it with Sharpie marker onto an overhead sheet.

The second class, I had students trace a castle pattern and cut it out.  We talked about brick texture and how to make the brick pattern.  Using cut-up sponges and grey paint, students spent the period adding the pattern to their castle. 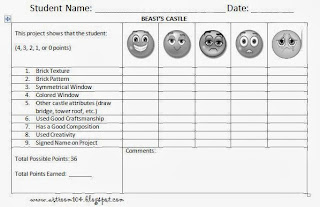 The third class (and the class in which about 1/3 completely finished), I showed students how to trace and cut a hole out of the middle of their castle towers for their windows.  They had to add color to their stained glass window, cut it out, and tape it to the back of their castle.  They then used the scrap paper bin to add other windows, a drawbridge and a roof to their towers.  Here are a few of the finished castles! 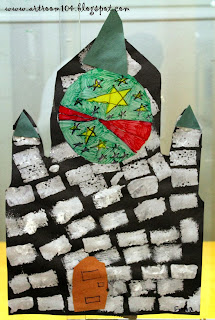 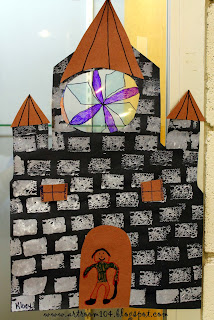 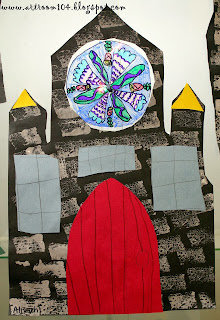 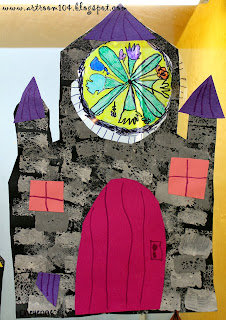 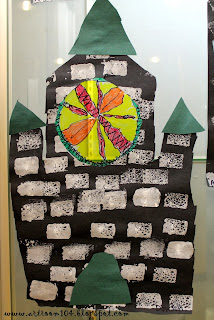 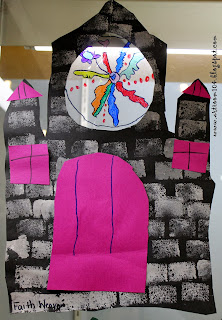