In Art History, once we finished up with prehistoric art, we moved on to Mesopotamia and then Ancient Egypt.  So far, even though we only meet every other day, we are keeping on track extremely well with my planned out timeline for the school year.  We have three more weeks left for the first quarter and my goal is to cover Ancient Greece by the 10 week marking period.  We just finished with the Minoans and Mycenaean, and will be starting Greece on Tuesday this week.

Here is my student's diorama for Egypt, as well as her essay.  At this point, I will start going through her essays to point out areas that she could elaborate on her ideas, and I plan on teaching her the Chicago style of citations (footnotes and end notes).  For her next essay, I'm going to require her to use citations as well as cite the textbook we are using in her essay.  We will build slowly from there! 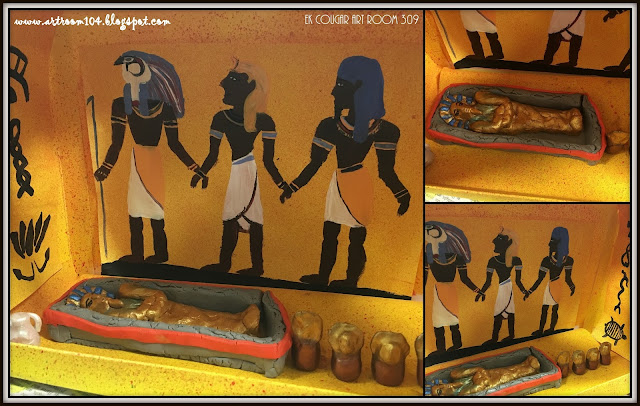 Ancient Egypt is, by far, one of the most impressive cultures in history.  From the sky-high pyramids, to the mummification of their dead, tot he solar religion system, Egypt has obviously amazed archaeologists, historians and even artists for centuries.  The ancient Egyptian style of art is shown through paintings and carvings on the inside of pyramid walls, sculptures created to honor gods and the dead, and the actual structure of their buildings, such as pyramids.  Throughout this unit, I learned all about the culture of Egypt, which helped to further my understanding of the artwork from this time period.  The ancient Egyptians used techniques that differentiate their art from other cultures around this time, such as the canon of proportions--a twisted perspective of the human body, showing a front view of the shoulders and torso, a side view of the head, hips and legs, and identical hands.  Gods and goddesses are shown with human bodies and animal heads in all Egyptian artwork.  What truly amazed me about the Egyptians is their idea of permanence.  Temples and artwork alike were created very strategically and with much thought in order to assure that they would last forever.  This idea is also shown through the mummification of the dead, as a way to prepare their people for a permanent afterlife.  Ancient Egypt has had a great impact on the world of history, religion, and art.

For my Ancient Egypt project, I I decided to decorate a diorama to look like the inside of a pyramid.  To achieve the ancient pyramid feel, I used spray paint in yellow and red to create a golden look to the pyramid walls on both the inside and outside of my diorama.  Inside, I painted a large depiction of Egyptian artwork on the back wall, with two men and a god shown in a line.  To make this look extremely realistic, I used the cannon of proportions to paint the figures.  Their heads are shown from a side view, although their bodies appear to be from the front view.  The god I painted has a bird mask for a head, as Ancient Egyptian art depicted gods and goddesses with animal heads.  On the two side walls of my pyramid, I painted hieroglyphics as a writing form, but the writing style they sued includes shapes of objects rather than letters.  Symbols I used include the eye, hands, and a turtle. I also created an Egyptian pharaoh in a sarcophagus out of modeling clay, dusted with gold and blue pigments to give it a shiny appearance.  Surrounding the Egyptian sarcophagus are four jars, also made out of clay, which would have been used to hold the mummy's stomach, liver, intestines, and lungs.  These jars are decorated to represent the head of the mummy.  Ancient Egyptian culture has had a major impact on cultures throughout history, and the world.
Posted by Mrs. Impey at 1:53 PM