This year, I am excited to say that I have an Art History course that I am able to offer students college credit through SUNY Potsdam, the institution I attended and earned my degrees through.  While I originally had 3 students in it (which I thought was amazing, considering history is a tough sell at my district), a math class was moved during the summer and I lost two students, leaving me with one student.  Either way, it's still great, we are getting some bonding time, and I'm making art along with her!

We are using the Annotated Mona Lisa as a textbook for this class, and we began with Prehistoric Art.  In an attempt to make this class not just lecture (and I'm glad I decided on this because it would be really hard to lecture every day to ONE student), we are incorporating a historical art project every few cultures.  As part of the project requirements, my student can create whatever she wants, as long as she displays the characteristics of that culture AND uses an artistic technique by the culture, such as making her own brushes and paints, or using a paint technique or a material specific to that culture.

We started with prehistoric art, of course, and when we got to the project, she decided (and I thought it was a GREAT idea) to make a diorama for each culture!  So, as we progress through the year, she will have a pretty awesome, 3-D timeline made!  Along with each project, I ask her to write a two page essay that discusses her project in terms of the techniques and materials she used, how those might reflect the ancient culture, and how her project and decisions as a whole represents that culture.  In a college art history class, you usually have to write some sort of term paper, usually 10 pages minimum (at least I had to!).  The cooperating professor approved my plan of multiple 2 page essays, and as we progress through the year, I will teach her how to properly cite using the Chicago format of footnotes/end notes. 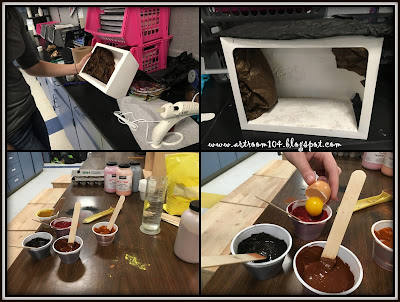 We used tissue paper, hot glue, and then Liquitex Spray Paint (which is INSANELY AWESOME!) to create the caves.  We also made our own egg yolk tempera, which we will utilize again for our Egyptian dioramas, except that we will have to make some gold paint!

My current student taking the class is a senior and is potentially going to college for art, whether she majors or minors in it.  She loves writing, so I've sort of tailored this class with her in mind.  Here is her first completed project and her first short essay, written completely by her without an edits from me: 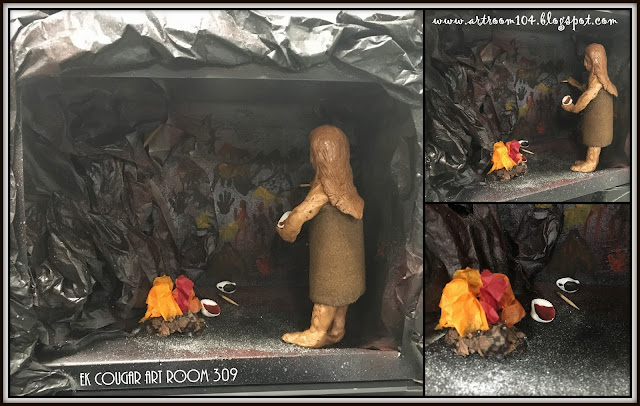 The Prehistoric Era dates back to about 35,000 BC and is one of the first eras known to create artwork. Artworks were created during this time mostly to adorn the body or to decorate.  The artwork created by people during this time period can be defined as cave paintings and small sculptures.  The artists, mostly female, would make all their own materials, such as the paint created from charcoal, clay, water, blood, and even urine.  The paintbrushes would also be handmade, from materials such as twigs, human hair, and grass.  Sculptures would be made of ivory, bone, stone and antlers.  This time period had a long lasting effect on artists and people around the world, as this was the beginning of the world of art.
For this project, I chose to create a diorama to represent a cave filled with cave paintings, a fire, paints, and a cave woman.  I spray painted the diorama to look identical to a cave, and also built tissue paper up along the left side to give the cave a more realistic appearance.  I added texture to the inner part of the cave to show a rough, rock-like texture on the floor and walls.  Next, with the help of my teacher, I made my own paint from pigments, water and egg yolks.  This process was very interesting and I loved the experience.  I used these paints to decorate the inner walls of the cave, painting such things as wild animals, hunters, and hand prints. The idea for the wall paintings came from the notes I had taken in class, and are accurate depictions of what would have been present on cave walls.  I also added a human figure, a cave woman, to the diorama.  She is dressed in a leather "dress", which would have been created from an animal hide hunted, most likely, by the men.  I chose to add a woman over adding a man because most cave painters would be women, which we know because of the small hand prints visible on the walls.  The hand prints were used as a "signature" for the artwork, and can be found throughout many caves.  I created a fire displayed on the inside of the cave because the paintings were normally found deep inside the caves, where it would have been colder.  I also added some of the paint I made into small shells, since these were used to hold paint during this time period.
Overall, I found this project to be a great experience and I really enjoyed it.  I believe my diorama accurately represents a cave woman and the wall paintings.  The overall process was unique because I've never made my own paint before, which I found to be interesting.  I also like that I added several identifiable factors into my diorama, which helped to show that it's based in the Paleolithic Era. 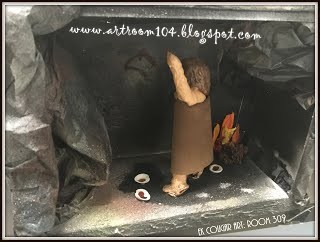 My diorama I made with my student.  :)  Not nearly as good as hers!