The final visual journal assignment that was due at the five week marking period was called Mind Map.  I asked students to take this right brain / left brain quiz and then illustrate their results. (There is also an app for the iPad for this particular quiz.)  This, of course, required them to do a little research to understand what the right and left parts of the brain did.  This project really stressed a lot of them out.  If they didn't know what it meant to be right brained, they would ask me, and I would tell them, "Go look it up on the iPad." Which would result in a lot of whining. Some days, I literally had to tell them not to ask me any questions, consult the document in Google Classroom, or ask their friends, at least with the 7th graders.  (My 7th graders this year is a pretty needy group...perfectionists...almost feels like they've been hand-fed and they aren't used to doing things on their own anymore...we are slowly breaking down that barrier in the art room!)
Now, I know that there are some arguments out there that the right brain / left brain theory is an old one and doesn't apply anymore, but I think there is value to this.  First, I wanted students to have an unbiased idea of how they think.  Most thought they would be left brained, but when they took the quiz THE FIRST TIME, it showed they were more right brained.  (Obviously, they would then take the quiz again and skew their results...so if you do this with your students, only allow them to take the quiz ONCE.)  Many were surprised that they were 50/50.  Some weren't surprised at all that they were mostly left brained.  Once they took the quiz, we were able to talk a bit about what that meant for them in art class.  If they are more left brained and mathematical, I would expect that they may like to draw using grids and rulers...perfectly ok!  I had hoped that by doing this assignment, it would put them more in tune with how they think and what comes more naturally to them so that they could then apply that thinking to their assignments. 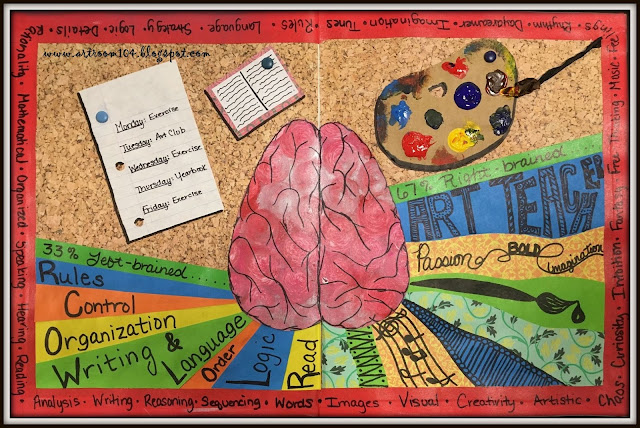 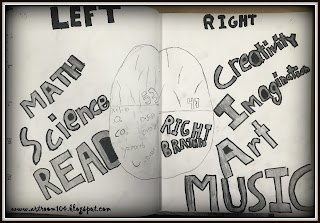 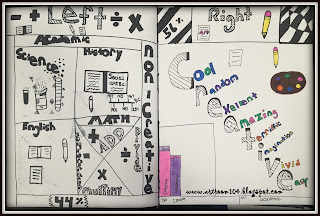 One of the few students who didn't want to use a brain in their image. 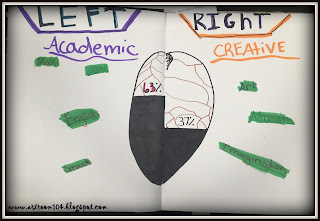 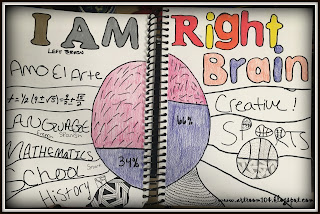 Absolutely loved this one!!!  Though I think she may have skewed her results because she definitely has more right brain in her than she thinks she does! 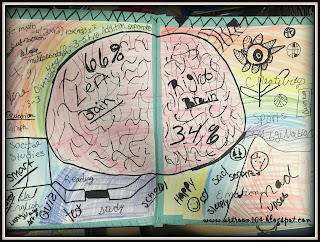 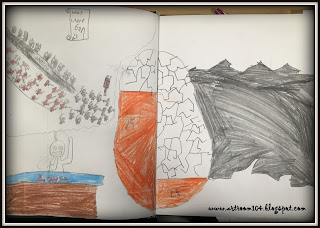 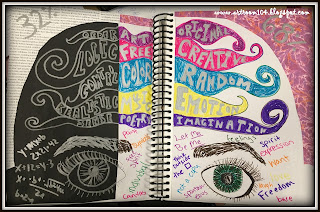 One of my Drawing & Painting students.  Absolutely love her take on this assignment!  She's the only one who actually used a head! 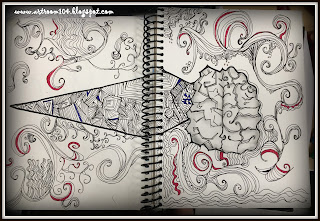 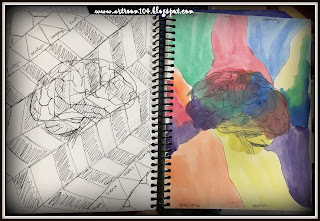 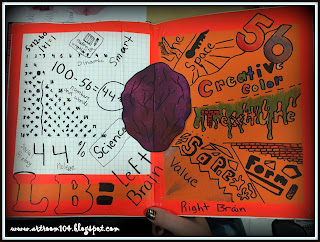 7th grader...the same with the fabulous graffiti name from the previous post. 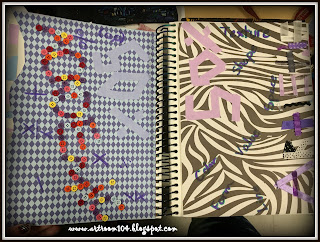 Now, again, many of these weren't horribly interesting with design, using mixed media, or brimming with creativity, but they were a great place for us to start having a conversation as a class and to work on critiquing ourselves and others.  Later this week, it's my goal to have students upload these to Artsonia using classroom mode and answer a few questions to write their artist statements, and then look at what the students created from the other classes.  Round one of visual journal assignments is OVER!