My first graders completed their second rainbow project this week.  I gave them one class to create a Roy G. Biv collage.  This is the first time I have really given a project without showing or telling them how to do it...I showed them my plain example, and then gave them the black paper for the background and offered the students peach/brown paper for the skin (ironically, everyone chose peach paper, even the darker skinned students I have).  They did really well on this!  It was a little hectic for my liking, with paper everywhere, but the products they created still had a really good outcome!  I've seen this project on Pinterest here, but I gave the students artistic freedom to draw Roy's head however they wanted to.  I had to prompt some of them to draw his head bigger, but most of them did pretty well.  I also stipulated that they had to use two strips of paper per color for his hair.  I also encouraged them to cut, bend, and curl Roy's hair as well! 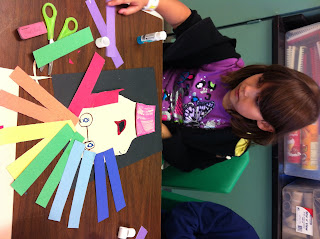 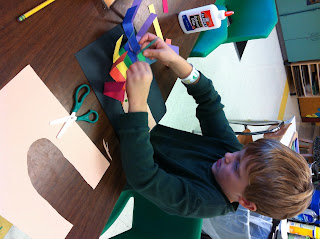 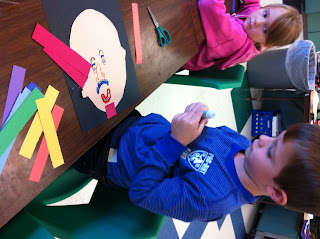 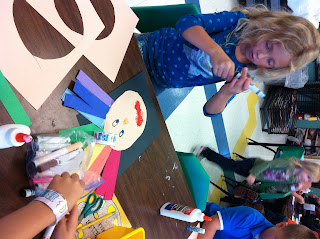 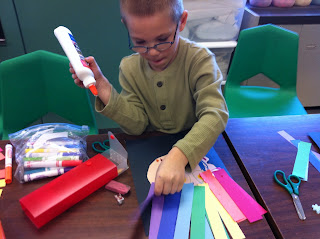 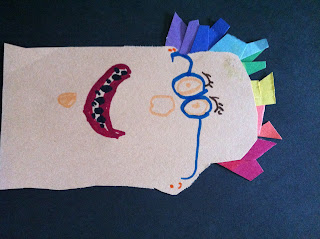 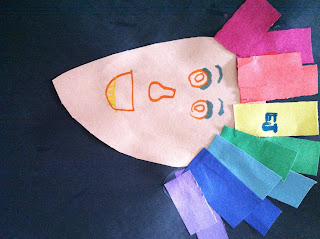 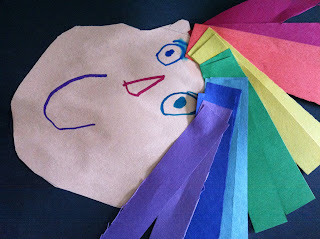 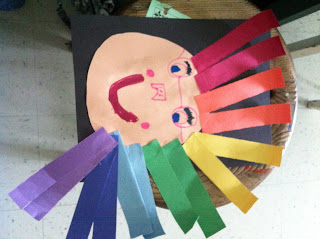 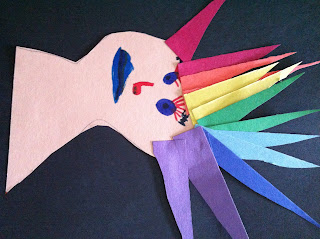 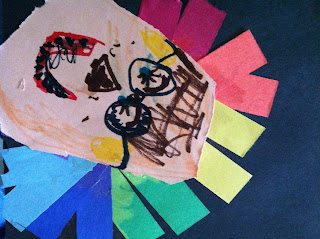 These were some of my favorites from the completed projects!  These students really got creative with different hair styles.

I am also testing out a generic project rubric with these Roy G. Biv collages.  Since our district is using Marzano, I figured using the generic rubric would help give me points on providing clear rubrics/goals for each project to students.  They will glue these rubrics onto the back of their projects before beginning them.  This way, they will always be able to see what I am grading them on.  I saw this type of rubric on Pinterest here, so I tweaked it a little for what I need.  In particular, I added the "good composition" section to grade students on their placement of objects and to make sure they use the entire page smartly.  I'm sure I may have to adjust it once or twice to get it right, but here is what I'm using so far! 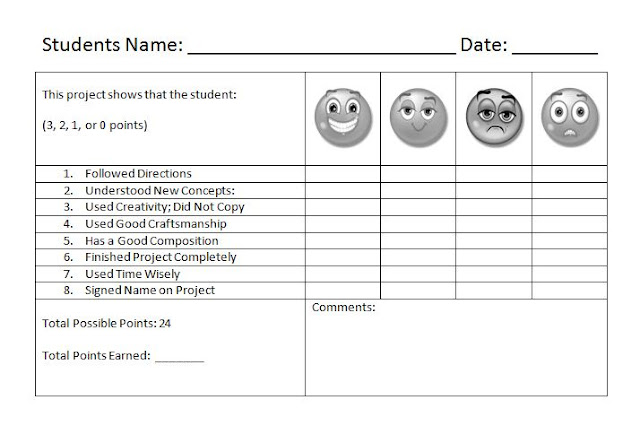 As for how my week went, it was the week from you know where for me!  I think this was one of my worst weeks ever...between receiving mixed messages and misunderstanding information about my SLOs from my administrator and have rowdy kids during after school...I was so beat and stressed on Thursday, that I cried after school!

First, I had a little kindergartner have an accident during class.  I felt so bad because when she started crying, I literally had no idea what had happened to her!  We were in the middle of our first painting project, so it was crucial that I circulate the room to make sure everyone was on task, but I couldn't for the life of me figure out why she was crying!  Then she started asking for her mom, so I thought maybe she was just home sick.  By the time I checked on her the third time, there was a puddle on the floor so I finally realized what had happened.  By this time of course, it was time for me to start teaching the kids how to clean up during a painting project.  That completely went out the window as I tried to make sure she wasn't embarrassed any more than she already felt.

Now, to make matters worse, I didn't have any art smocks in my room (I'm switching over to washable paint thank goodness!) because I brought them home to wash over the summer, and then I forgot about them in my garage until Thursday morning!  I couldn't get this poor girl out of her seat and the nurse was taking an important phone call....then I remembered my art smock was tucked in a drawer somewhere!  After digging that out and wrapping her in an "art dress," I sent her down to the nurse with a friend and she was taken care of...and I thought my day was done there!

During after school, I decided to do a coat of arms project.  This really interested a lot of kids, but I had a group of three 6th graders who thought they were above everyone else.  They were rude and obnoxious, being bullys to kids in the classroom and to me!  I couldn't get a hold of anyone to send them out of the room so I had to deal with it.  After my morning of stress, I just cracked.  I made everyone clean up 15 minutes early and put everything away.  Then, what really sent me over the edge was a 4th grader who decided he didn't like his project so far and just threw it away.  (Mind you, him and I have discussions about how this isn't appropriate because it wastes materials and as an artist, you should learn to fix your mistakes.)  I made him pick it out of the garbage so he sat there and pouted.

After getting them off to the buses, I went to talk to my super about a hiring committee I'm on.  She asked me what was wrong and the flood gates just opened!  Needless to say, these four students will be taking a day or two off of after school activities, and they won't be considered on my part for art club when I start it.  I also think that I may have to send home my 4th grader with a small writing assignment.  A fellow art teacher showed me a book she reads to the young kids called Beautiful Oops! (I think that's what it was called...).  I'm going to find this book and I think I am going to make him read it on his own and write me a small paper on what he can do the next time he is unhappy with his artwork!