We finally tackled the Mondrian cakes the week of Memorial Day weekend.  You can see my post here about the bakery that makes artist inspired cakes, which then inspired this baking project with my 12:1:1 class! 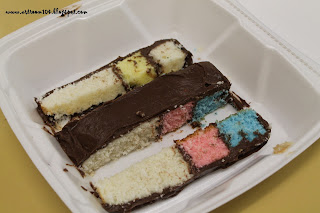 This is my cake.  After we finished frosting them, I cut mine open so the students could see what their's would look like.  We wanted them to take the cakes home to share with their family so they weren't allowed to eat all that sugar at school! 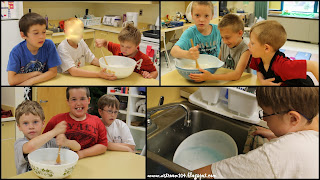 On the first day, we split the kids into three groups and they mixed three cake batters.  We practiced measuring liquids with a glass measuring cup and they even had to wash their own dishes!  We split the batter into four bowls and baked a white, red, blue and yellow cake.  After they cooled, I cut the cakes into squares and rectangles, and put them in the freezer for frosting two days later. 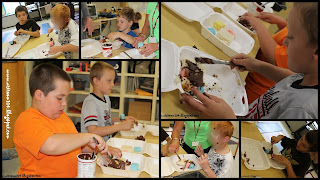 On the second day, I showed them step-by-step how we were going to assemble the cake.  After all the pieces were "glued" together with frosting, they frosted the outside to hide the colors on the inside! 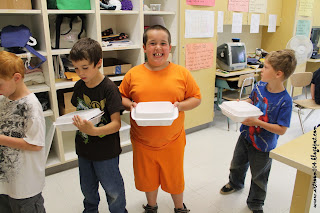 The students really enjoyed this project and it was a good project to just teach some basic kitchen skills!  Unfortuntely on assembly day, there were two students who had to sit out.  One refused to wash his hands and under his fingernails and the other kept licking the frosting off the knife!  They were all told no licking hands, fingers or knives until we were done!  Then, anything that was on their fingers was fair game, and that was it!