The second official project that kindergartner's finished up before my leave was this Jasper Johns number project.  This is a repeat project that I did from last year, with some alterations.  Last year I was able to spread this out into more of a complete unit because I saw students twice a cycle, but this year I didn't feel I could spend that amount of time on this project, so I shortened it and altered it a bit more to fit within the Kindergarten Common Core Math standards.

This project took about 2 1/2 days for most students to complete.  On the first day, I showed students my power point about Jasper Johns and we talked a bit about pop art.  One of the math standards for kindergarten is being able to count objects that are in a row, a column, a grid and in a random assortment, and then write the appropriate number.  To mirror that, I paired students up and gave them a brown bag filled with 9 wooden beads of different sizes.  One at a time, I had the students pull out a handful of beads, count them and write the number down in the first square on their paper in pencil.  Their partner was supposed to double check their counting and the number they wrote.  They alternated until each partner had their six squares filled with a number.

The final portion of the second class and the subsequent class was to color in the background.  My directions were that students were supposed to choose THREE oil pastel colors to color in the background behind their numbers.  This is where some students didn't follow directions, or appeared to not be able to follow directions.  Many students grabbed an oil pastel and started coloring right over the top of their numbers.  Some colored around but used more than three colors.  I gave multiple demonstrations at each table to try and show students how to color AROUND their details, but many still struggled, so I sense that this is something that this group will need more work on! 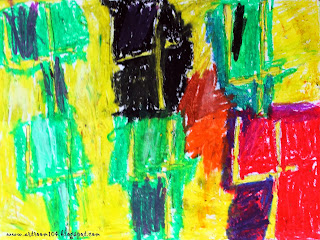 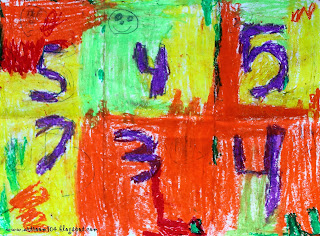 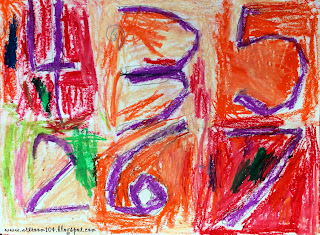 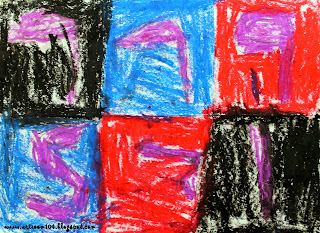 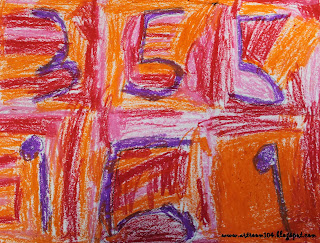