Kindergarten just finished up a snowman unit.  It worked out perfect because I didn't know they were learning about snow in their classroom!  This unit took us a total of three days to do from start to finish.

Day 1: On the first day, we built a snowman as a class on the smartboard using some snowman games.  The particular snowman game (I call it a game...it really isn't a game...just an interactive activity to build a snowman, though I'm sure you could turn it into a game!) came from Castle Arcana.  I went to this website and saved the site to my hard drive.  It saves it as a shockwave flash file and makes it easier to find instead of hunting through websites to find it.  They even have other fun activities for the smartboard like the trim a Christmas tree activity.  (Here is the link to the Castle Arcana Christmas activities page.) 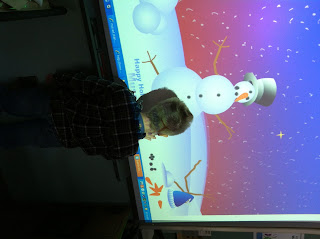 Anyways, after building a snowman or two as a class (so everyone gets the chance to come up), I gave everyone a "Roll-A-Snowman" game to do for the rest of the period.  Right now, I don't have my worksheet at home.  I based this off the Roll-A-Monster game.  I searched for a similar snowman one and couldn't find one, so I made my own template for the dice games and drew in my own snowman features.  The kids LOVE these games!  They are great to play with K-1 too because, as I found out, they are working with recognizing the numbers on the dice in their classroom!  Here is my template I made and a few student examples.  Tomorrow I'll be sure to post my filled out Roll-A-Snowman game that I made. 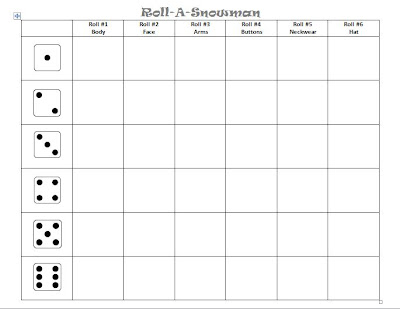 I did this with my 12:1:1 class as well...on of the aides thought this was great and suggested I let the kids make their own dice game using a blank grid!  WHAT?  WHY DIDN'T I THINK OF THAT!? 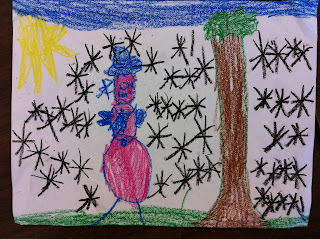 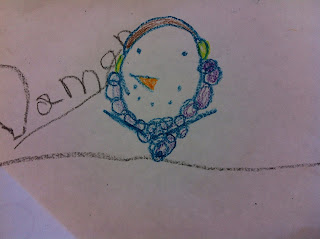 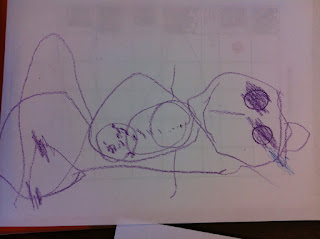 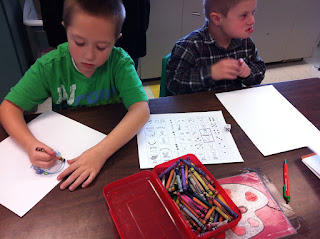 Day 2: On the second day, we reviewed how to build a snowman (large ball, medium ball, small ball).  I passed out large blue construction paper and these great foam dauber brushes I bought this year. We used these brushes before on the fall trees (which I just realized I never posted about! Whoops!) when we talked about pointillism, so it was a great review.  We talked about how the pointillism effect would help create the texture of fluffy snow.

Day 3: On the last day, we used various types of objects to add the details.  Buttons, pipe cleaners, foam, felt, beads, etc.  I changed it up with each class as to what they got to use depending on how wild they were when they came in.  I also let them use markers to add some details (many tried to draw Santa and the reindeer in the sky). One class used gel glitter glue to add snowflakes.  One class used q-tips and white paint, and the other two I sprayed with fake snow. 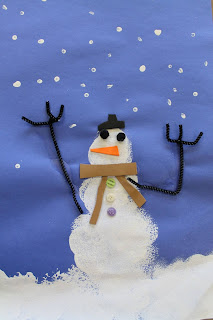 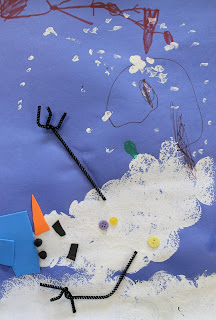 I love the one on the right!  This was the only student who did something different with his snowman!  I was a little worried he didn't understand about snowman on the second day when we did the sponge painting, but when he started adding his details, I have to say I was impressed! 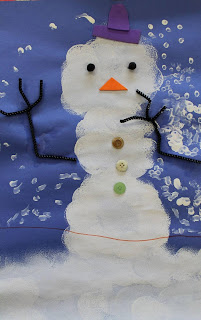 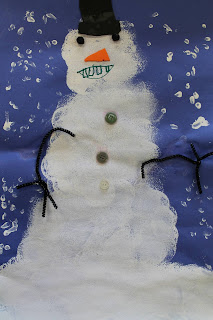 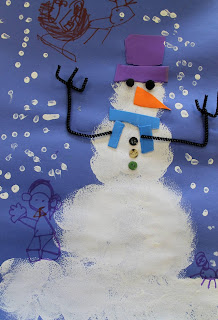 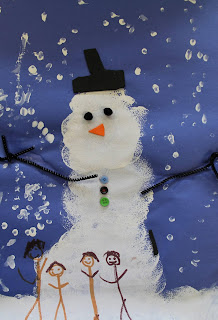 It always makes me giggle a little because some kindergartners (and even 1st and 2nd graders!) don't realize that their people are naked!  It's winter!!! ;) 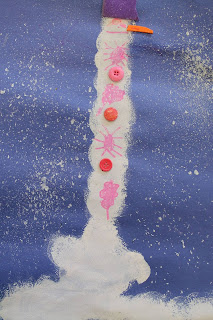 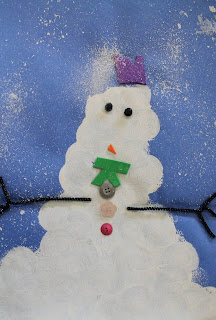 These two have some of the spray snow... 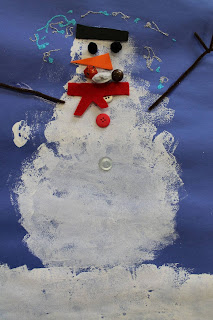 This one has the glitter glue stuff...