So, is anyone else noticing that the kids are starting to go a little crazy?  Warmer weather has finally hit New York and the kids are starting to show it!  My kinders are especially kooky..."Mrs. Impey, what do I do now that I'm finished painting?" "Mrs. Impey, where do I wash out my paint brush at?"  "Mrs. Impey, where do I put my wet painting?"  ARGH!  These simple things we have worked ALL YEAR on have suddenly flown out of their minds at the onset of warm weather!  Plus, state testing is just about finished (aside from the science test at the end of May), so it always seems like everyone's brains shut down!

These are some of our finished pattern cows in Kindergarten.  I do really love the bright colors of the liquid watercolor paint, but I'm not sure what happened with some of the patterns!  Students were told they had to have at least five large spots with a DIFFERENT pattern in each spot...they weren't supposed to have two AB, straight line patterns...but a lot of them seemed to forget!

They did a really awesome job drawing their cows, however.  Each cow has a different personality! 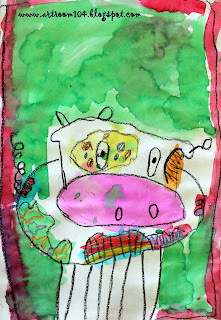 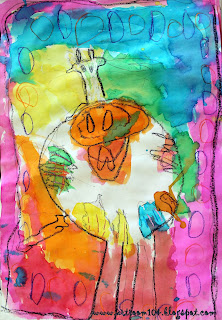 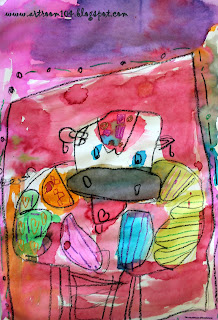 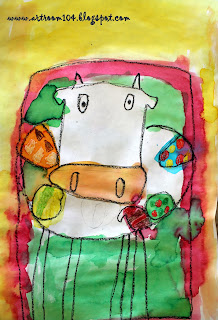 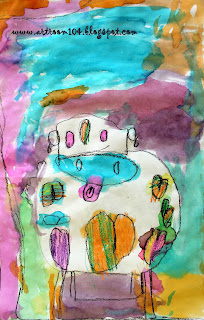 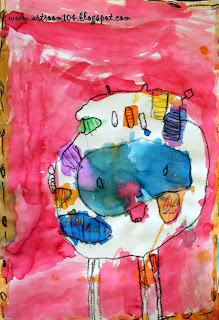 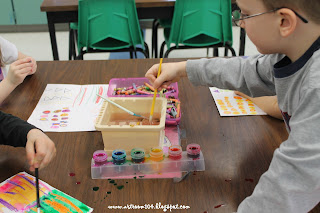 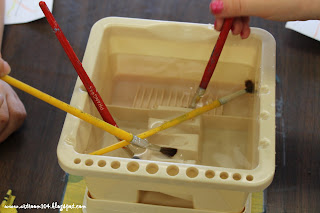 I've seen a lot of bloggers post about putting liquid watercolors in the little utility cups, like Jen over at Draw the Line At, but I decided to try these 6-well paint holders.  I found a box of about 18 of them stashed away in corner.  In each holder, I put red, orange, yellow, and green.  In my set of liquid watercolors that I bought from Blick, there were 10 colors.  In three of them I put magenta, while in the other three I put the violet.  I also received two different blues, so I split those up as well.  The last two colors I received were brown and black.  In each well, I mixed the paint 1/2 and 1/2.

I was a little worried about the kiddos spilling these holders when they bumped the tables, but they're doing pretty well.  They seem to understand that this paint is actually like water!  It's also easy to rinse them off after we're done because all you need to do is put the caps back on and run them under the sink.

I also bought some new water buckets to try at each table, and the kids really like these as well.  I bought six of these Shiva water basins, one for each table.  They have these nice ridges in the bottom for rinsing paint off the brush, so instead of hearing brushes slap the edges of the water cups I had before, it's quiet and there is less water/paint splatter!  I think I may invest in 6 of these for the high school room for next year as well...