It's taken a while to get these done, but we finally did it!  About a month back, the librarian asked me if I could do a project with 2nd graders that related to community helpers...i.e. police men, emergency workers, firemen, etc.  While we finished up our gyotaku prints, I brainstormed ideas and finally came up with this project!  I searched Pinterest up and down to see if anyone else had done any community helper projects in art class, and found some little ideas that helped me build my big idea.

The first thing that we did was talk about cityscapes versus landscapes.  We had previously done this winter landscapes back at Christmas time (to which I just realized I never did a post about, but found the idea on Pinterest...), so this was a good project to introduce the other 'scape'.

We looked at a power point, did a review game, and then looked at the symbolism and characteristics of important buildings in a community.  On the first day, I had students draw their city.  They had to draw a road at the bottom of the  page and then they had to have at least five important buildings.  We drew in pencil and then outlined in Sharpie marker. 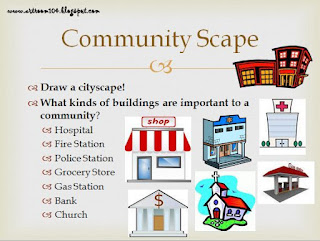 On the second day, we finished the outlining and then put a red hand print on the road.  This later became firemen (idea straight from Pinterest here).  Students also started making emergency vehicle collages.  They were required to have at least 1-2 emergency vehicles on their road.  I showed students some collages that I found on Pinterest to give them a jumping off point.

On the fourth and last day, students finished up their collages and made their firemen! 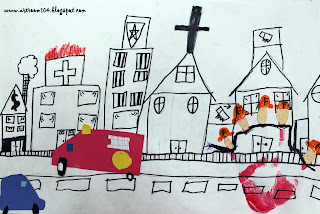 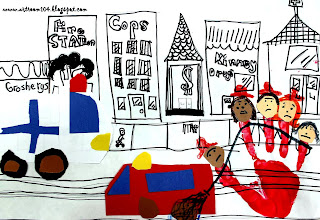 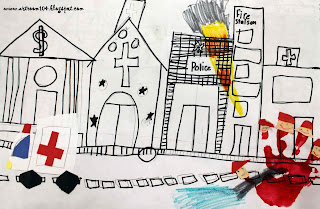 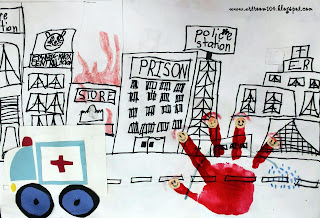 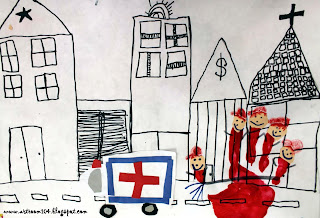 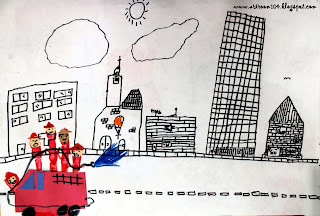