1st graders are currently working on a dinosaur unit in class, so I decided to do fossils and dinosaurs in art!  Since the NYSATA conference, it has been my goal to start doing at least one clay project per grade level each year.  I used to only do it with 3rd-6th, but I was inspired and learned some great techniques to teach the younger students with real clay, not the air dry stuff!

So, to kick off the dinosaur unit, I started off with fossils.  I also had my first formal observation this year during one of these classes.  (It went pretty well!)  Anyways, we talked about why fossils are important (because they help us understand about dinosaurs and the earth's climate way back when...), how they were made, and what they were of.  This is where I incorporated the clay....as seen on Pinterest!

Here's how the first day went:
1. Viewed the power point together about fossils and discussed.
2. Everyone sat in a circle on the floor while I demonstrated how to pass the clay from hand to hand to "wedge" it. (I had already pre-wedged the clay for them, but I wanted them to get a basic understanding of why we have to do it.)
3. I flattened the clay with my palm, and carefully pressed dinosaurs and seashells into the clay.
4. Everyone went back to their seats and got a piece of Manila paper to work on.
5. We reviewed the process, and then together we "wedged" and flattened our pieces.
6. I passed out trays with toy dinosaurs and seashells.  While students pressed into their clay, I went around and carved their initials into the clay with a needle tool.
7. Students cleaned up, and then while we waited for everyone to dry their hands, I had them discuss in their groups at their tables a fact to share with the class about fossils.  This was their ticket to line up.

Unfortunately, I don't have any pictures of them working...it was a tad bit hectic with their excitement.  After they are fired, we will paint them with watered down black tempera, and then wipe the extra paint off to make them look weathered.

On the second day of this unit, we talked about the different kinds of dinosaurs and their characteristics, which they have been doing in class as well.  We looked at some fossil pictures of dinosaur skin and talked about texture as well.  I printed off some "how to draw" sheets for dinosaurs, and I had the students practice drawing them on their own for the rest of class.

Today was the third day of the unit for Class A, and we continued with the theme of texture on dinosaurs.  I had seen multiple posts on Pinterest of doing close-up drawings of animal eyes so I decided to alter it for 1st grade dinosaurs.  We reviewed texture and talked about how to draw the dinosaur/reptile texture using lines and shapes.  I told them I wanted them to choose one interesting part of a dinosaur to draw close-up.  I also showed them three examples I drew, since I knew this was a little bit of abstract thinking for their part.  (Next time, when I'm not behind on my school work, I'll have print-outs of dinosaurs and view finders for them to use.  Either way they did quite well with this concept anyways.)  We drew them with pencil first, outlined with black Sharpie, and then colored with crayon. 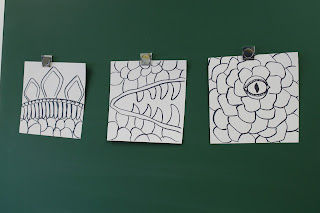 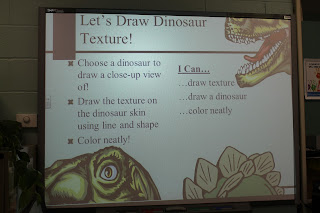 I am punching a hole in each corner so that they can all be tied together in a "dinosaur quilt".  Here's our progress on these so far! 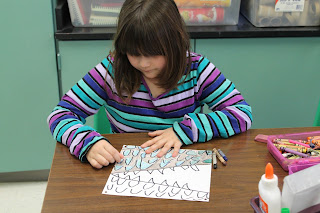 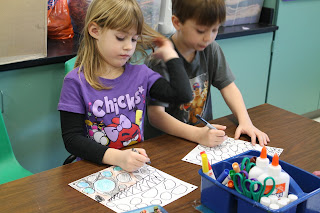 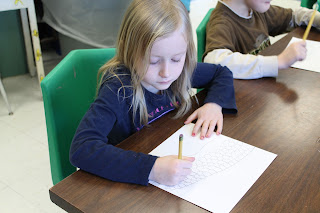 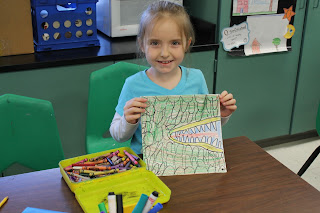 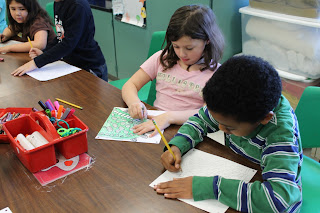 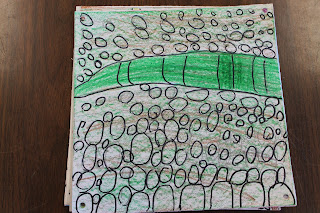 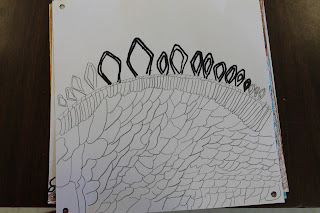 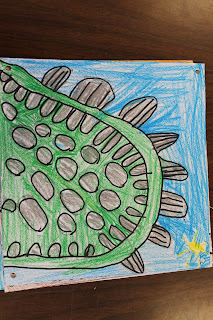 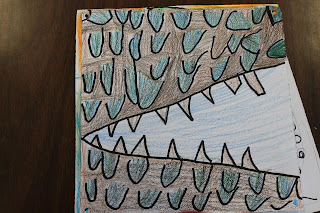 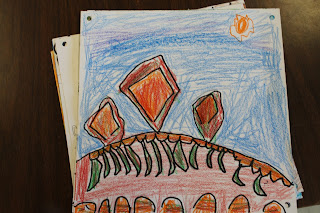