My third graders are doing simple machines in science class, which matches up perfectly with the next unit I wanted to do with them!  I've been wanting to build castles with a grade, so I figured this would be the perfect class to do it with...we could incorporate simple machines in our draw bridge!

I've seen numerous examples of these floating around Pinterest, but most of them use just cardboard tubes of different sizes to create a princess-like castle.  I did a little research on castles (because let's be honest...I know very little about castles), and I used various sources from pppst.com to create a handout (I'll have to attach that tomorrow...I left my hard drive at school).

On the first day of the project, students partnered up and read about the parts of a castle and then tried to match the name of each part to its picture on the back of the handout.

It has taken us approximately two days to put these castles together so far.  From here, we will gesso the cardboard (the shiny, printed side of the cereal boxes, not the brown side) and add the texture to the walls.  Students will be able to paint medieval scenes on the inside of their walls and they will have to brainstorm how to make their drawbridge work.  Finally, we'll make the cones to put on the tops of their towers. 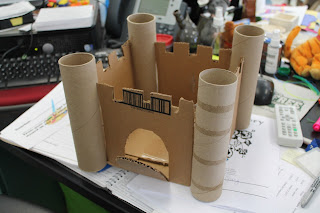 This is my castle that I made.  I used regular cardboard and paper towel tubes.  I found that it was VERY difficult to cut the cardboard using my own scissors and I knew the students wouldn't be able to cut it with their scissors, so I had them all bring in cereal boxes. 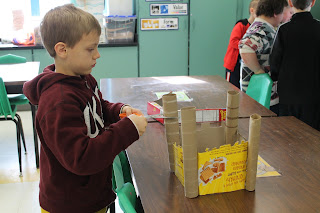 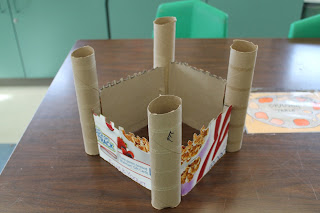 Each student used one large cereal box to make their castle walls.  We cut out the front and back of each box, and then cut those in half.  Students cut out the little "teeth" on their walls, and then folded the sides to create a little flap to make it easier to hot glue them to the cardboard.  Once glued, they had to trim down their towers if they were too tall to make them a little more proportionate. 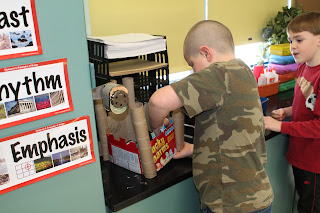 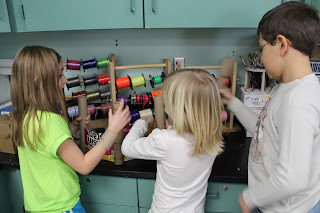 This is the first time I've let 3rd graders use hot glue guns and it was VERY successful!  Some of them were leery of using the glue guns, so I helped them, but everyone else did quite well!  We had no burned fingers!  Once a student finished constructing his or her castle, they helped others catch up...it was great watching their teamwork today! 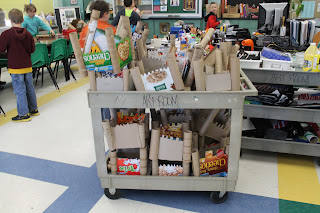 My cart of castles!  Class B still needs one more period to finish constructing all of their castles.

I just BARELY had enough paper towel tubes to do this project...I've been stock piling them for a while and I have one grandparent who has faithfully sent me two garbage bags full of them since the beginning of the year.  Now, I just need a project to deplete the toilet paper tubes that I have left...
Posted by Mrs. Impey at 3:58 PM