We are FINALLY finishing up with our cardboard castles (you can see how we built them here)!  Between vacation time, half-days and snow days, it seems like we've been working on them FOREVER (since the end of January)!  These took up soooo much room in my classroom, I'm glad to be done with them!  By the time we finished constructing them, I had wanted students to draw some nice details to cut out and put inside, like dragons, knights, etc. but believe it or not, they complained about it!  (Which is weird because this particular group of students is OBSESSED with the medieval times...last year we did two dragon projects because they kept asking for them!)  So, needless to say, I'm a little unhappy with some of the craftsmanship on the details...of the few students who did add details, they cut a bubble around their objects, instead of cutting them out neatly on the line....sigh.

I did, however, like that they wanted to incorporate felt...that was something I hadn't thought of.  So, here they are, our finished cardboard castles.  You can check out the rest on our Artsonia gallery! 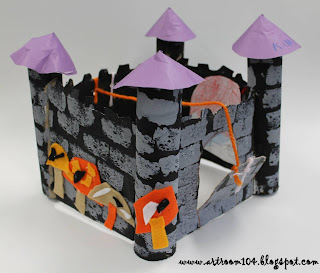 This one had some of my favorite outside decorations...these cool, "magical" mushrooms! 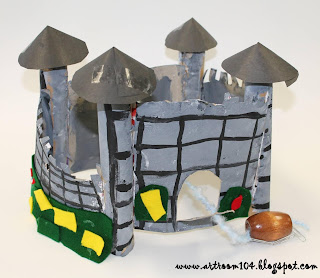 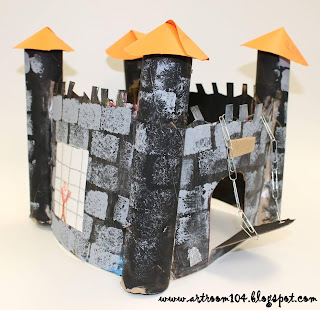 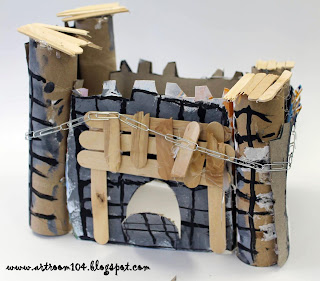 This student didn't exactly follow directions for the tower roofs, but I couldn't knock him for his creativity...it's still a pretty cool looking castle. 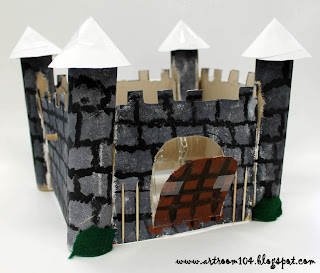 This castle was done by a student who is very precise in his artwork.  He fought me up and down to not put any details on his castle so it wouldn't mess up his brick.  He also refused to paint the inside of the castle, which I wasn't too found of.  (Not fond of the use of tape either...)  This student was really creative with his drawbridge...it works to go up and down on it's own! 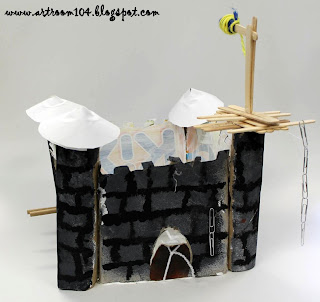 If I ever do this project again, we'll definitely use the sponge-texture for the bricks instead of painting the brick lines.  It was so much faster.  I also think I'll definitely make them paint the inside, at least a solid black color.  Even though we covered the boxes with gesso, you can still see some of the cereal box print through the primer which I find distracting.
Posted by Mrs. Impey at 5:29 PM