Getting Ready for YAM!

Tomorrow officially kicks off my YAM festivities at school.  Here's what I have done so far! 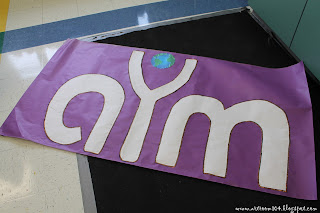 This is for my YAM bulletin board.  I'm going to put the caption, "Share your favorite art memory!" on the board with this and invite faculty, staff, students and community members to write in the logo. 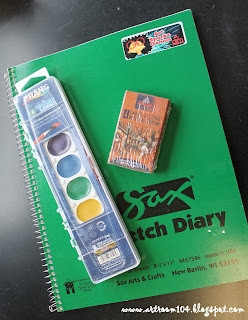 Every day I will be giving an art trivia question on the morning announcements.  I'll take all of the correct answers at the end of the day and do a drawing for sketchbook and an art medium to go along with it.  Since I don't like the washable watercolors I bought, I'm going to give the rest of them away.  I also have some conte crayons that I don't use in class that I'll give away.  I got these YAM stickers from Nasco to attach to everything I give away.

Here are my interesting trivia facts.  Some of these are trivia I had in my art history notes, others just from surfing the web.  I don't have all of the sources to site for these...but if you search "interesting art trivia" on Yahoo! or Google, you'll find most of these.

I am a priceless painting of a woman.  I was stolen from the Louvre Museum in Paris by an employee in 1911, but returned two years later.  In 1956, a man threw a rock at me and damaged the paint next to my left elbow.  I am currently in the Louvre Museum in Paris, protected in a climate controlled environment and encased in bullet proof glass, which cost seven million dollars to build.  Leonardo da Vinci spent 12 years painting my lips.  Who am I?  The Mona Lisa

Where was the first pencil invented?  England in 1565.

What are Mondrian’s favorite colors?  Mondrian painted all of his paintings with the primary colors: red, yellow and blue.

Pablo Picasso is an artist famous for starting the cubism style in 1909.  He has a very long name, made up of 23 names, as he was named after various saints and relatives. (Pablo Diego José Francisco de Paula Juan Nepomuceno María de los Remedios Cipriano de la Santísima Trinidad Martyr Patricio Clito Ruíz y Picasso).  Interestingly enough, Picasso learned to draw before he learned how to walk!  His first word was “piz”, which is short for “lapis” and is Spanish for what?  Lapiz is Spanish for pencil.

This artist is also well known for being an inventor.  In 1495, he designed a pyramid-shaped parachute and began painting The Last Supper.  This artist and inventor is also credited for designing and inventing the high heel shoe for Catherine de Medici, who was from a prominent Italian family who commissioned lots of art from famous artists.  Who is it?  Leonard da Vinci.  Rumor has it, da Vinci invented high heels for himself because he didn't like being short, but others say he invented them for Catherine de Medici to wear at her wedding.

This artist considered himself more of a sculptor than a painter, but eventually Pope Julius II convinced him to paint the Sistine Chapel.   It took this artist four years to paint the ceiling, and he did so while lying on his back.  Who is it?  (Hint:  One of the Ninja Turtles was named after this artist!)  Michelangelo

This artist is famous for his glass work.  This artist designs all of his art, but because of a car accident in which he lost one of his eyes, he cannot blow the molten glass to create his art.  Because of that, he works in collaboration with other glass artists.  Some of his famous series are the Macchia series, his chandeliers, and Persians.  Who is the artist?  Dale Chihuly

This artist was born in 1958 and died at the age of 31 in 1990 from a disease that was untreatable at the time.  His art style was a blend of graffiti art and advertising design.  This artist’s work is very colorful and our mural by the Elementary gym is based on his artwork.  Who is the artist?  Keith Haring

This artist was influenced by history, philosophy, religion and music.  He believed that, “Artists must express the spirit and their innermost feelings by orchestrating color, form line and space.”  Not only did he create art, but he also played the cello and the piano.  This artist claimed he could see colors when he listened to music, so he painted all of his paintings while listening to music.  Who is the artist?  Wassily Kandinsky

This artist is probably most well-known for the metal breakdown he had while fighting with his artist friend, Paul Gauguin.  During this fight, the artist got so upset that he cut off part of his hear and sent it to his girlfriend!  Who is the artist?  Vincent Van Gogh  (I realize that this fact is a little skewed...there are many versions of what actually happened...I've heard he mailed it to his girlfriend, cut it off and hand-delivered it to a prostitute.  I figure this is the most appropriate way to say this trivia fact over the announcements!)

This artist was born in 1912 and died in 1956 in a car accident.  He is known for his “drip” style painting, also known as “action painting.”  His canvases were so large that he once knocked down a wall in his studio to make it large enough for a 20-foot canvas.  In 2006, his painting, “No. 5, 1948” sold at an auction for $140 million, making it the most expensive painting ever.  Who is the artist?  Jackson Pollock

I'm going to fill in some of these artist facts with some random color theory questions, elements of art questions, etc. etc. 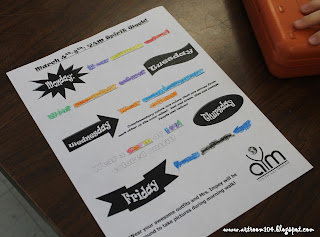 This is my flyer that is going home with students for the spirit week next week.  I am reviewing each color theory term in class and having the students color in the words with the correct colors. 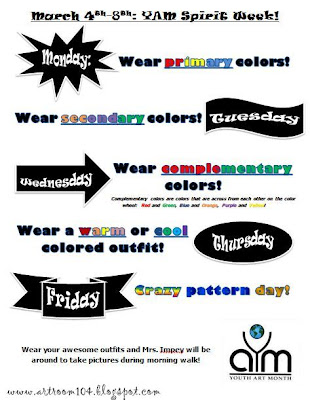 This is the version of my take-home flyer that is hanging in each classroom and in the hallways. 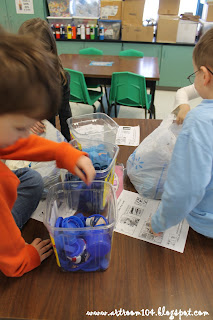 Finally, today we started prepping for our first bottle cap mural.  I had my kinders start sorting the caps within each color category...light, middle and dark tones of each color. 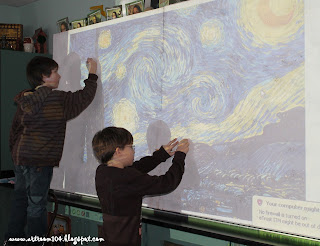 These 5th graders helped draw out the Starry Night on the boards, and the rest continued the bottle cap sorting. 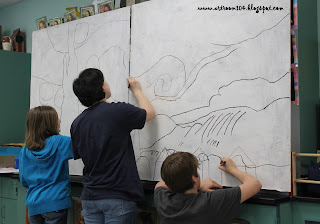 These 6th graders were finished with their projects so I had them outline the traced Starry Night with black marker so we could see it better.  Tomorrow I'll have students start painting the boards.